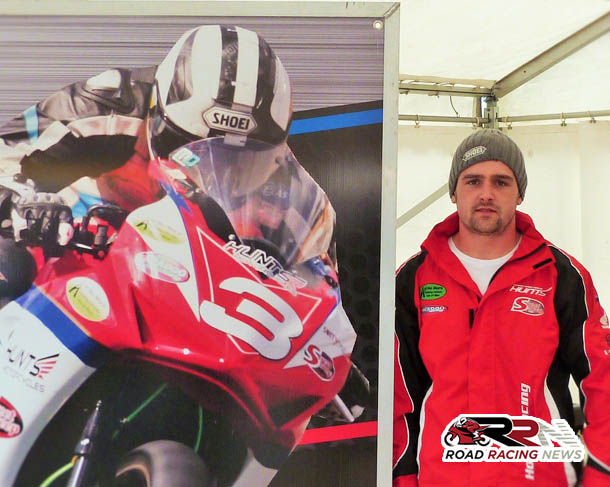 In November of 2013 it was officially confirmed that Michael had joined the mighty Honda TT Legends Racing team.

He joined John McGuinness and Michael Rutter, to form arguably the strongest line up in a team at the Isle of Man TT since 1994 when Castrol Honda ran Steve Hislop, Joey Dunlop, Philip McCallen.

Practice week at TT 2013 did not begin in the greatest fashion for Michael, as technical issues struck the Honda TT legends machine. 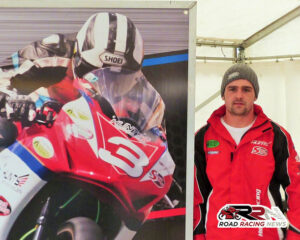 Despite the early set back, he soon proved his worth on the factory Honda finishing fastest in Friday evening’s practice, before lapping close to the 131 mph mark on Saturday, to finish fastest in superbike class throughout practice week.

Before the start of the Dainese superbike race, much excitement was around John McGuinness and the replica Joey Dunlop leather/helmets he was wearing, plus the colour scheme on his superbike, all as tribute to Joey’s last superbike TT win with Honda in 2000.

John was setting off at number three, whilst Michael Dunlop was away at number six.

Michael got the hammer down on lap one, moving into race lead, and opening up a lead in excess of three seconds over Guy Martin, by the end of the opening lap.

From here he lapped in excess of 131 mph on lap two, to further increase his advantage, he then maintained an ultra rapid and consistent pace, to clinch his first superbike TT victory.

In the winners enclosure Michael was absolutely delighted, he had accomplished an ambition, that he was desperate to achieve.

Plus he became the first rider in ten years to beat a finishing John McGuinness, in a superbike race, around the Mountain Course.

His superbike exploits where backed up a performance of the highest quality in the opening Monster Energy supersport encounter, where he held off strong challenges from Bruce Anstey and brother William, to be victorious.

Next up was the Royal London 360 superstock TT. Gary Johnson on the JRC Racing ZX10R Kawasaki, was holding off the attentions of Michael as he lead on laps one, two and three.

The stage was set for a quite dramatic final lap, which would see one of the all time, great TT Races laps of all time seen.

Giving it everything in pursuit of the race leader, Michael was pushing the MD Racing CBR 1000 Honda Fireblade to the limit.

By the mountain on lap four he had a firm grip on the race, at the line he was victorious, as he made it a hat trick of wins at TT 2013.

His lap speed of 131.220 mph was a new superstock TT lap record, which still to this day stands.

What other pieces of magic could he add in the next race, to add to what he had already shown, the answer was another stunning final lap.

As in the superstock race, Michael Dunlop was it his brilliant best, when it mattered the most, he was quickly nudging more and more into Bruce Anstey’s lead.

Eventually he hit the front, but Bruce was not giving up, as both crossed the line up at the end of lap four, neither knew who had won.

News circulated to them, that it was Michael who was victorious by just 2.313 seconds, following lap speed of 128.666 mph, a new supersport TT lap record, which still stands today.

With four wins in a week, two new class lap records, a new personal best lap speed, could he end TT 2013, with victory in the blue riband senior TT?

On the opening lap, the race was red flagged due to Jonathan Howarth crashing out down Bray Hill.

When the race was re started, Michael gained another top draw start, quickly becoming involved with a battle out front with Honda TT Legends Racing team mate John McGuinness.

It was nip and tuck between them on the opening laps, same on laps three and four. It was during the pit stops on lap four where McGuinness gained a decisive advantage over Dunlop.

A top draw pit stop saw the rider from Morecambe increase his grip on the race, by lap six with the lead up to over seven seconds, it looked even for Michael Dunlop, a near on impossible task to overhaul his team mate for race victory.

This would prove to be the case as John McGuinness clinched his 20th TT victory, as Michael finished second, to end a quite brilliant two weeks of pure road racing action.

Following the race, it was obvious how disappointed Michael was, an interesting point to make here is he went quicker on a superstock bike at TT 2013 then on a superbike!

Despite missing out on senior TT glory, it was still a magical TT 2013 for Michael Dunlop.

He had shown to everyone that he was the new yardstick at the TT Races.

In November of 2013, Michael announced that he was planning to take a year out of racing. This announcement stunned everyone, still at the time, I was one of many who felt, he would be on the start line at TT 2014.

Having parted company with Honda, TT 2014 would bring new challenges, in the form of competing for a manufacturer, returning in full factory form, for the first time in 75 years.