At just 32 years of age, Michael Dunlop is already a 19 times TT winner and has been victorious at virtually every road race circuit, in which he has competed at.

Known for his sheer determination, all action style and a will to win which surpasses arguably every other rider in the sport, he’s a one off with his riding style, attitude and persona.

Ian Hutchinson’s comeback from a serious leg injury which almost ended his racing career, has provided one of the most feel good stories in the history of pure road racing.

Now firmly back at the top, he joined Mike Hailwood on 14 TT victories in total at TT 2016, following a memorable hat trick of victories, which was not without controversy, with many and suspicion still surrounding whether his Monster Energy Supersport race 2 victory from 2016, was won in the correct sporting manner.

The second most successful rider in TT history, John McGuinness MBE is still amongst the firm favourites for wins around the Mountain Course, although now more prominently on TT Zero machinery.

It’s fair to say his 2015 Senior TT success stunned many, there was no inclination beforehand of the TT hero securing yet another momentous feat.

Since making his roads debut at the North West 200 in 2014, Peter Hickman has gone from strength to strength.

Now the outright Mountain Course lap record holder, the first rider to top the 135 mph lap mark at the TT Races (135.452), he’s firmly established as one of the greatest road racers of his generation.

The evergreen Bruce Anstey, 34 times an international road race winner, is still as competitive as ever, as proven by his performances at the MCE Insurance Ulster Grand Prix from 2017.

Regarded by many as the most naturally talented rider on the roads, he has enjoyed thus far a quite brilliant career on the Mountain Course, the Triangle and Dundrod.

Currently regarded by many leading figures as the Isle of Man’s leading roads exponent, Conor Cummins has for the last ten years been an established accomplished competitor at the International road races.

A present part of the Padgetts Racing set up, the Manx star has been back to his best form over recent seasons.

Lee Johnston has the happy go lucky temperament about him but when he is in pure road racing competition, he’s amongst the most determined competitors.

Eight times an international road race winner, he’s grown and grown in stature in recent years. Without a question worthy of the title world class, it was a stellar 2019 for ‘General Lee’, claiming opening Supersport honours at the North West 200, prior to finally joining the TT winners circle, at TT 2019.

The undoubted current leading exponent of Oliver’s Mount, Dean Harrison is regarded by many as the world’s leading International Road Racer.

America’s leading roads exponent during the 2010’s was in my opinion Mark Miller.

The 2010 TT Zero winner, has in past years lead the Splitlath Buell challenge at the TT Races, wrapping up many a highly creditable result.

Nicknamed ‘Bonny’ Stefano Bonetti has consistently over the last ten years, been the standout competitor from Italy at the TT Races.

Austria’s Horst Saiger, is regarded by many as continental Europe’s leading roads competitor.

A consistent collector of first class results at the Macau Grand Prix and North West 200, he’s also an accomplished exponent of the Mountain Course and the fastest road racing circuit in the world, Dundrod.

Amongst a very select group of competitors to have lapped the Mountain Course in excess of 131 mph, David Johnson is arguably at this moment in time, Australia’s top pure road racer.

A four times TT Races competitor, Hudson Kennaugh is still at present more known for his exploits on short circuits, then on the roads.

Don’t be surprised to see in the future the ultra determined rider from South Africa, in contention for a TT podium finish, in particular in the Lightweight class.

Currently Asia’s only competitor on the Mountain Course, Masayuki Yamanaka made history at the 2015 Manx Grand Prix, by becoming the first rider from Japan to secure a podium finish at the Manx, as he finished second in the Newcomers C race.

This years Manx GP saw him wrap up series of 26th place finishes, in the Junior and Senior races, along the way lapping in excess of 114 mph.

Since making his Manx Grand Prix debut in 2014, Marco Pagani has gone onto establish himself as one of Italy’s most accomplished pure road racers.

Make no doubt about it, Cameron Donald is a great pure road racer. A two times TT winner, he unofficially became the first rider to lap the magical Mountain Course in excess of 131 mph during Thursday evening’s practice session at TT 2009.

Although he’s now in my opinion not as competitive as he was from 2008 through to 2013, he’s still a class act who is more than capable of in the future wrapping up more international road race podium finishes.

Four times North West 200 winner Glenn Irwin is regarded by many as a future holder, of the coveted title of been the world’s leading pure road racer.

Although this is a possibility, it’s all going to depend upon how committed Glenn is to participating not only at the Triangle and Macau, but also returning to Dundrod and sampling of course the Mountain Course.

TT 2016’s leading Mountain Course newcomer Michael Booth, has been amongst the leading roads newcomers throughout 2016.

A recent third place finisher in the Dundrod 150 Challenge race, Michael has the potential to soon be challenging for highly notable results at the international road races.

The youngest rider to compete at TT 2016 was Josh Daley. Making his roads pure road racing debut on the Mountain Course, he enjoyed a productive two weeks of TT competition.

Piloting his own teams ZX6R Kawasaki, he wrapped up 46th and 52nd place finishes, in the Monster Energy Supersport races.

One of Australia’s fastest rising roads stars is Alex Pickett. Since making his Mountain Course debut at the Manx Grand Prix in 2013, the ever cheerful rider has since gone onto three times thus far, at the Isle of Man TT.

Without a doubt his most momentous roads feat to date, was in the recent Superbike Classic TT, when he finished the leading privateer on the DP Coldplaning/TC Racing Kawasaki, following an excellent seventh place finish.

Having finished a great ninth in this years Lightweight TT, plus recording series of highly creditable results at Imatra, Bjorn Gunnarsson in my opinion at this moment in time deserves the accolade of been regarded as Sweden’s leading pure road racer.

A proven exponent of the Mountain Course, Bjorn has the talent to in the future, be definitely in contention for a podium finish on Super Twins machinery in the Lightweight class.

A frequent front runner at the North West 200 and Macau Grand Prix, Martin Jessopp showed at TT 2016, that he’s becoming a highly accomplished competitor on the Mountain Course.

Following his third place finish in the Lightweight race, Martin said afterwards that he was speechless. His maiden TT Races podium finish, is the latest in a long line of notable roads achievement’s for the highly rated rider.

One of the Isle of Man’s fastest rising roads stars is Jamie Williams. His 2016 pure road racing season has seen him secure many a notable result, which include fifth place finish in the Newcomers A Manx Grand Prix.

Most recently Jamie wrapped up series of first class results, at the 66th Scarborough Gold Cup, which included victory in the second leg of the David Jefferies Cup Junior B races.

2016 IRRC Superbike champion, Vincent Lonbois, in recent years has established himself as one of Belgium’s leading pure road racers.

A winner this year at Oss, Hengelo, Chimay and Imatra, he has been in sparkling form on the Herpigny Motors BMW Motorrad Belux backed S1000RR BMW. There is no doubt that he has the potential to in the future become an established competitor around the Triangle, Dundrod and Mountain Course. 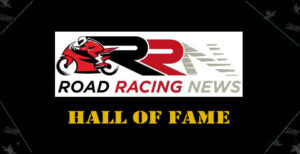 Road Racing News hall of fame celebrating the achievements of the individuals who have had a profound, iconic and positive affect on pure road racing.

Our hall of fame inductees at present are: