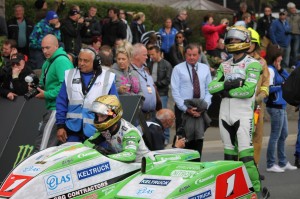 Holden/Winkle’s lead over Harrison/Aylott grew as the Silicone engineering racing Honda powered outfit was flying as the pair looked set to have a great chance of second TT victory.

John Holden/Andrew Winkle’s lead at end of lap one was over 17 seconds over Dave Molyneux/Patrick Farrance who had edged in front of Conrad Harrison/Mike Aylott who now held third place.

Alan Founds/Tom Peters was one of the stars of opening lap of race holding eighth position as we entered lap two.

With a lead of over 17 seconds Holden/Winkle had a commanding lead over Molyneux/Farrance on lap two, by Glen Helen the gap had risen to 18 seconds whilst Harrison/Aylott maintained third place on Printing roller services backed outfit.

Ian Bell/Carl Bell was in a great battle with Karl Bennett/Lee Cain as both outfits battled for fifth place. Holden/Winkle’s lead over Molyneux/Farrance had come down to around 15 seconds, 16 time TT winner Molyneux was on a charge as he looked set to mount a challenge for 17th TT triumph.

By the end of lap two John Holden/Andrew Winkle had a lead of over eleven seconds over Dave Molyneux/Patrick Farrance, Conrad Harrison/Mike Aylott remained in third place, Tim Reeves/Gregory Cluze where secure in fourth place in front of Karl Bennett/Lee Cain.

Mechanical issues forced Ian Bell/Carl Bell out of race at end of lap two, soon technical issues where to hit Holden/Winkle’s outfit as the duo’s lead was down to only three seconds at Glen Helen as Molyneux/Farrance could sense victory was on the cards.

By Ballaugh bridge Molyneux/Farrance had over fifteen seconds lead over Holden/Winkle who where suffering technical issues, Conrad Harrison/Mike Aylott where now not far behind challenging for second place.

The rest of final lap of the race saw DMR outfit duo Molyneux/Farrance maintain a good pace and grew a bigger and bigger lead out front as Harrison/Aylott moved into second place by Ramsey on lap three in front of Holden/Winkle.

Past Cronk Ny Mona the leaders went and soon across the line went Dave Molyneux/Patrick Farrance to record Sure sidecar TT race 2 victory. 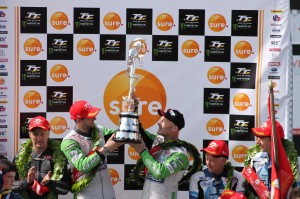 This victory is Dave’s 17th on the mountain course whilst its Patrick Farrance third time a victor at the worlds greatest road race. Conrad Harrison/Mike Aylott finished in second place over forty seconds down, second place finish meant overall TT 2014 sidecar championship victory for the duo.

Greg Lambert/Kenny Cole where a highly creditable seventh in what was a race which saw drama, excitement and another win at the worlds greatest road race for sidecar TT legend Dave Molyneux. Whilst Patrick Farrance is quickly establishing himself as a highly successful passenger at Isle of Man TT.