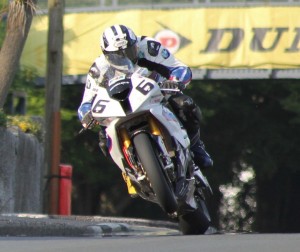 Before TT 2014 many people thought that it would be a big ask for Michael Dunlop to be competitive on BMW Hawk racing superbike.

But by the end of practice week lapping at 131.501 mph it was clear that the BMW was ultra competitive going into Dainese superbike TT. Following a dazzling performance throughout “maverick” clinched at the time his eighth TT victory.

Another achievement secured by Michael during this race was becoming the fastest rider in TT history from a standing start, lapping at 131.730 mph on opening lap. On lap two he lapped at 131.890 mph which is his personal best lap speed around the mountain course.

It looks likely that the supremely talented rider will be running his own team once again in 2015 alongside competing on an as yet not known factory backed superbike.