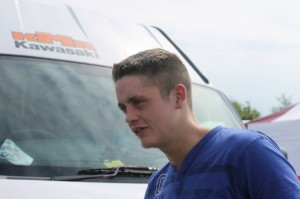 Connor Behan impressed with a top 20 finish in Monster energy supersport TT race 2. Connor competing for KMR Kawasaki finished in 20th place in a race which saw him set good race pace, show great speed and that he is up to grips with the worlds most famous road race circuit.

36th place finish was recorded by Connor in opening supersport TT race this year, overall both supersport races at TT 2014 have being a top success for the rider who is competing in his second full season of road racing.

Connor’s North West 200 debut saw him produce some eye catching performances including highly creditable in supersport races and leading super twin race 2, a highly anticipated Ulster Grand Prix debut is happening this year which he is greatly looking forward to.

Next race coming up at TT 2014 for Connor is the lightweight TT where a surprise or two could be produced by a rider who is getting better and better on the mountain course having made his Manx Grand Prix debut in 2013 recording second place finish in newcomers A race.