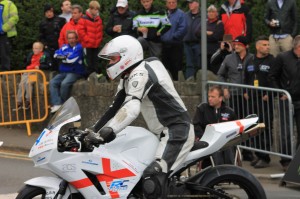 Adrian Harrison is greatly looking forward to TT 2015. Adrian who made his Manx Grand Prix debut back in 2012 has gone from strength to strength on the mountain course since then having secured in recent years hugely creditable results at TT 2013 and TT 2014.

The 2014 road racing season has been a big success for Adrian who had a memorable Southern 100. Opening super twins race saw excellent fourth place finish achieved but super twins race two would prove to be even better. 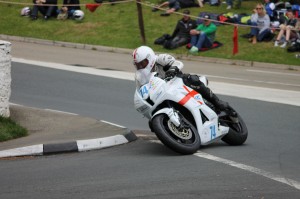 Arguably the main highlight of TT 2014 for the rider who is getting better and better on the most famous road race circuit in the world was in the lightweight TT race. 15th position was finalised as he rounded off action for 2014 at the Isle of Man TT in good fashion.

Looking to TT 2015 Adrian is all set for supersport races competing on a tuned CBR 600 Honda backed by Printing Roller services, ACS Bingley, Temple West Accountancy. For the lightweight TT he is competing on the same super twin which propelled him to third place finish in second super twins race at the Southern 100.

Adrian and his brother reigning lightweight TT winner Dean Harrison are making sure the bike is at the height of its competitiveness going into TT 2015. Action on the mountain course next year is set to be highly enterprising for the rider who produced many a top quality performance during 2014.