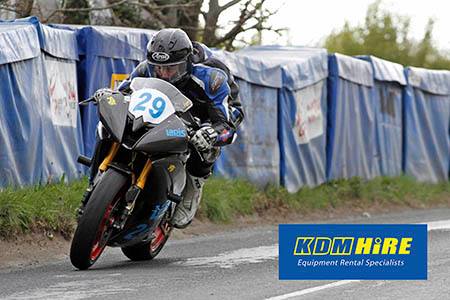 One of the many up and coming next generation road racers of the modern era, is Scotland’s Adam Lyon. 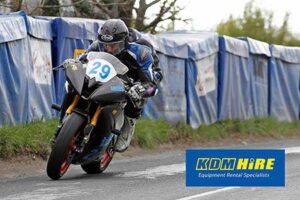 Despite his busy schedule, I managed to track down this young lad, who also hopes to make his Isle of Man TT debut next month, and here is what he had to say:

With the Isle Of Man TT Races being a personal goal, I was extremely keen to learn the trade the proper way by competing in Irish National Road Races to see if I had what it takes.

My first proper road race took place at the KDM Hire Cookstown 100, where I competed in the Senior Support races. I had no idea how competitive I was going to be and how I was going to cope with the whole aspect of racing on closed roads, but I feel Cookstown was the perfect event to make my debut.

With the limited track time in the senior support class, to say I was nervous going into the race is an understatement.

After qualifying 3rd on the grid, I was starting to feel at home on the bike and comfortable with the track but struggled to remove the fact that an hour before the roads closed for race day, there was normal day to day traffic circulating the circuit, along with tractors and cattle at McAdoo Corner, something I certainly wasn’t used to seeing on the racing line!

After several delays during race day, it was soon my turn to get on track. More nervous than ever but as soon as the flag lifted, I felt good and actually lead the race for the first part of the race. The race was then stopped due to an accident and then restarted.

I had a good wee battle with Joe Loughlin and crossed the line in 2nd place. I was over the moon as I had no idea we would be so competitive at our first ever road race.

Unfortunately I made the school boy error and booked my ferry home that evening and was unable to hang about after the race. To the point of riding the bike into the van as I came off the track and leaving straight away, jumping up and down in the van with leathers still on after a cracking race.

The season then went on to provide more success in the Scottish Championship with several wins on short circuits.

Then back to the roads at Armoy where I was able to get my first Road Race Win. I then had a strong debut at the Ulster GP in the Supersport class, despite blowing my race engine up in qualifying and having to race my road bike in the races, I manged to finish the last race in 11th place.”

“Looking towards the 2018 season, I am very much focused on the Roads with my TT debut being confirmed for this year. It has been on the cards for the past few years and I have been working hard to get to this point.

In preparation for this I will be returning to the KDM Hire Cookstown 100, to race in the Supersport 600 class on my Yamaha R6, the Open and Cookstown 100 races on my Honda CBR 1000RR Fireblade.

Running my own wee team with my own bikes is by far the biggest challenge I have had to overcome, and this could not be achieved without certain people getting involved. I cant thank my brother Liam, Uncle Roy and girlfriend Sarah for their much valued input.

I hope to continue to learn this year with the view to become a competitive road racer in years to come. For now I will just keep chipping away!

If anyone would like to get involved at any level, please contact me. It is greatly appreciated and will go a long way in my road racing future.

I would also like to thank the following people for their involvement and support for this coming season. Shirlaws Motorcycles, BDS Motorcycles, LAPIS Contacts Ltd, FPK Racing, Country Cars Of Bristol, The Angel Pub Durham.”