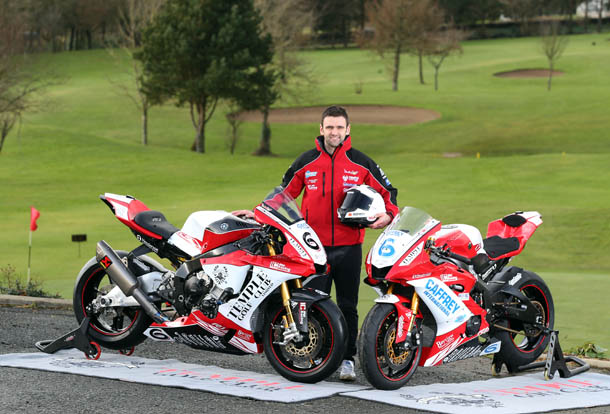 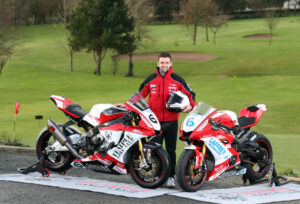 Speaking about this topic and much more, seven times international road race winner Dunlop who’s machines this year will carry a striking red, white and black colour scheme, stated when speaking about the season ahead:

“My Supersport package has always been strong but for the last two years I have been given competitive big bikes, but not the budget to run them properly.

Tim stepped in and gave me everything I wanted for the Ulster last year and the bikes were transformed, I wasn’t riding well but was still competing for pole position, in qualifying so I knew then what I wanted for 2018.

My indifferent results were beginning to take their toll, as I knew I was capable of better but that just makes me appreciate the position I am in now even more.”

“To have my team and bikes ready to go in January takes away so much pressure, I am mentally and physically in better condition than ever and looking forward to going testing.

Tim coming back to build the team for me is such a boost of confidence, I am continuing my supersport arrangement through Caffrey International as well as bringing my loyal sponsors Bayview Hotel and Henderson Food Machinery along, so I have everything I wanted and need to win races.”

“I have watched William from a distance for years and made no secret of the fact I think he is a natural talent with the potential to beat anyone.

I’ve also spent a lot of time developing the R1M without turning the potential into results so the opportunity to put the two together and prove a few people wrong was just too tempting to resist.

The R1M has been completely revamped since we were last on track and we have put together a good team with everything William asked for.

We plan to go testing in Spain before taking in some British Superbike rounds to make sure we are as sharp as possible when we arrive on the North Coast in May, I’m thoroughly looking forward to being back in the paddock and to finally work with William.”