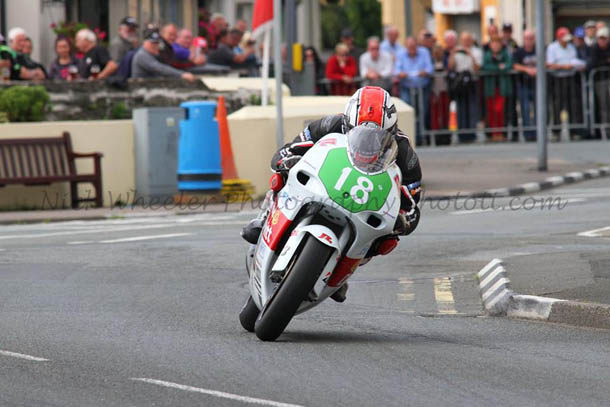 Most known for his exploits aboard 250 machinery around the Mountain Course, New Mills based Chris Moore is the next rider to take part in Road Racing News, ten questions challenge.

Runner up in the Formula 2 Classic TT of 2014, his answers to the popular series of questions are as follows:

“Having only raced at the Pre TT Classic at Billown as a national road race, I’ll have to say that, really enjoyable circuit and great atmosphere.”

“Yamaha TZ 250. Lucky to now own two of these brilliant machines and a tough call to pick a favourite, but I’ll go for my 1991 250B, we’ve been through a lot together!”

“It’s just an incredible buzz being allowed to do what we do on public roads, supported by real enthusiasts and helped by fellow competitors in friendly paddocks.”

“Having only done the TT I have to say that. The Ulster GP looks such a mega place though!

“I’m not a ‘rival’ to him but Bruce Anstey certainly has my utmost respect, such a talent and a real nice bloke. Total respect to all that go out and do their best though.” 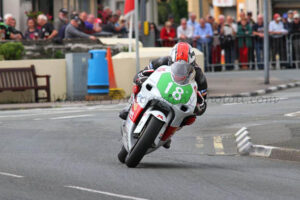 “Been lucky to have stood on the Isle of Man podium three times, but I’ll go for my runners up position to Ian Lougher in 2014 at the Classic TT over my 1996 Newcomers Manx GP win.”

“I suppose it would be quite good to have a race near to home here in the High Peak, Derbyshire, some cracking roads round here!”

“Never raced a Superbike on the roads and only raced one a few times short circuit, bad for my collarbones those things! Supersport it is for me.”

“Always crap at qualifying so fastest lap I suppose. If the fastest lap was a lap record I’d definitely take that over a pole position!”