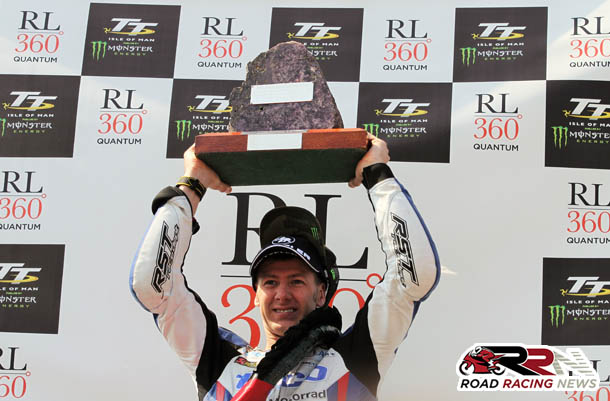 The pace setter up to Glen Helen on lap 1 was, Ian Hutchinson on the Tyco BMW leading by 2.494 seconds over Michael Dunlop.

The quickest two riders in TT history, had begun from where they left off in the opening Monster Energy supersport race, another great duel between the pure road racing legends, was very much on the cards.

As lap one went on Hutchinson started to crank it up at front, by Ramsey Hairpin he lead by over five seconds, as Dunlop on his own teams S1000RR BMW, was battling to keep in touch with the Tyco BMW rider. 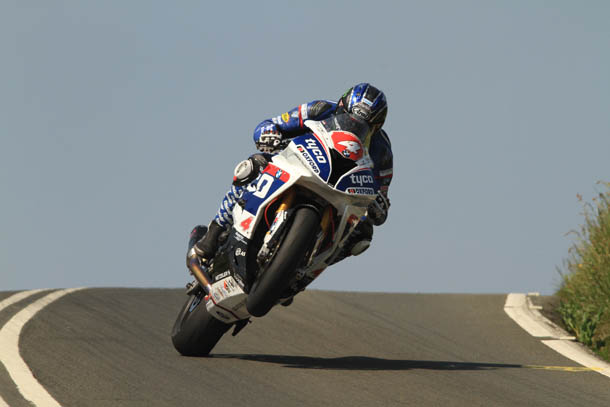 At Cronk Ny Mona, Hutchinson increased his lead to 9.178 seconds having been 7 seconds clear at the Bungalow.

James Hillier now into third having been sixth at Glen Helen, was on a charge on the Quattro Plant Muc Off ZX10R Kawasaki.

As lap one concluded, Ian Hutchinson now held a firm grip on the race, leading by almost 16 seconds over Michael Dunlop, following a dazzling new superstock TT lap record from a standing start, lapping at 133.098!

James Hillier third was not far in front of Silicone Engineering Racing’s Dean Harrison, just 2.7 seconds behind his Kawasaki compatriot, as Gary Johnson and Lee Johnston rounded out the top six.

There was drama as lap two began, as Michael Dunlop entered the pit lane, retiring with a damaged gear lever.

With Dunlop out of the equation, Hutchinson kept up a high quality pace, to move over 32 seconds clear of new in second place James Hillier, at the end of lap two.

Dean Harrison in third place, was just 4.5 seconds in front of East Coast Racing’s Lee Johnston, Michael Rutter, Gary Johnson and John McGuinness where all close together on aggregate time in fifth, sixth and seventh.

John McGuinness on his own teams EMC2 CBR 1000 Honda Fireblade, was gradually putting himself into stand out result contention, moving into fourth at Glen Helen on lap three.

Hutchinson was doing everything he had to do out front, by Cronk Ny Mona with a 40 second advantage, we all could sense that Hutchy was on the verge of a 13th TT victory.

Leading by 40.360 seconds at the completion of the third lap, Ian Hutchinson was well and truly in full command, whilst a great battle for second was developing between James Hillier and Dean Harrison, only 2.310 seconds covered them.

Lee Johnston retired at Sulby Cross Roads, this promoted Gary Johnson in fifth place as Michael Rutter in sixth, was producing another top class display around the Mountain Course.

With race victory pretty much in the bag, the final lap of the race, was a calm, cool and high class one from Ian Hutchinson.

Under no real pressure from nearest challengers Hillier and Harrison, he crossed the line at the end of the fourth and final lap, to clinch his 13th TT victory. 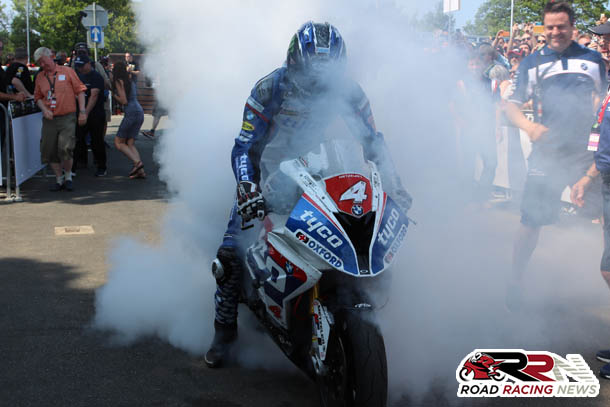 The victory, was a hugely significant one for TAS Racing who run the Tyco BMW outfit, it was Hector and Philip Neill’s teams first TT win since 2008.

The battle for second was a truly gripping one, in the end it was Dean Harrison on the Silicone Engineering Racing Kawasaki who finished a fine second. 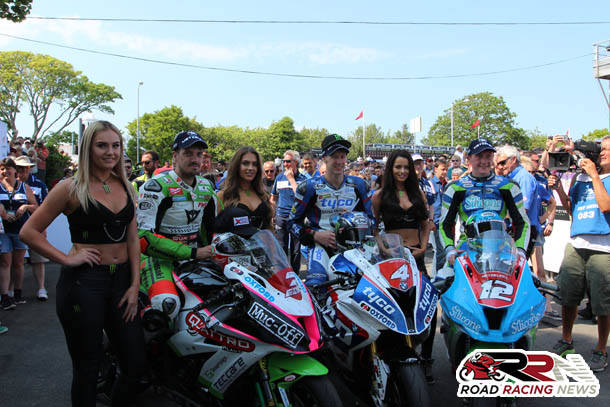 Dean was delighted with the result, Silicone Engineering Racing where overjoyed, at finishing leading Kawasaki runners.

Michael Rutter battled his way to a top draw fourth place finish, going into the race the Bathams SMT Racing rider, was only confident of a top six finish, so fourth position, will be a satisfying result for the four time TT winner.

Finalising the top six was Penz 13.com BMW’s Gary Johnson and John McGuinness who appeared in the closing lap, to encounter issues.