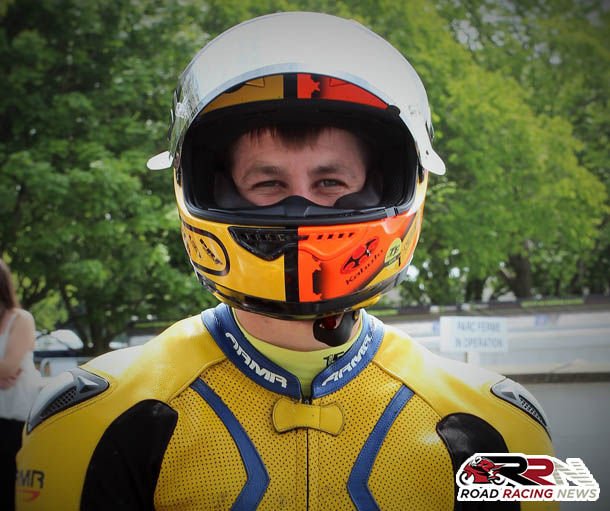 Rob Hodson has endured what has been a character building first time, competing at the Isle of Man TT.

An engine issue at Glen Helen after two and a quarter laps on the first night of practice on the PRF Racing GSX-R 600 Suzuki gave Rob and all his team a testing start to TT 2016.

Unfortunately Monday night’s practice session on the Superbike did not yield much more improvement as another engine issue occurred.

As practice week progressed, a couple of other little issues happened on his Suzuki mounts, but everything started to improve on the Superbike after successfully reeling off laps of the Mountain Course, lapping in excess of 120 mph.

The RST Superbike race would see an electrical problem effect the PRF Racing GSX-R 1000 Suzuki, this was stopping the bike revving clearly enough and by two laps of the Superbike race he had to retire at the pits.

Monster Energy Supersport TT race 1, with so many issues on the 600 the team had bought another engine, due to two that they had were broken.

Rob went onto finish an excellent 14th, but was then subsequently disqualified.

Reflecting what happened in the opening Monster Energy Supersport encounter and overall an ultra difficult, TT 2016 race week, he said:

The engine that was bought didn’t comply with the 600 cc regulations, which was such a shame and extremely upsetting for everyone involved with the team.

Hoping our luck had changed by now but with no engine to put in for the Supersport Race 2 on Wednesday 7th June had to sit the race out and of course the electric bike race which we had not been entered.

The Lightweight Race was up next and feeling ultra mixed up with everything going on, I set off, my head really wasn’t in gear, did the first lap but by lap two, had an issue with the bike, carried a bit of speed into Ramsey and was off, the end of the race for me.

We have decided to sit out the Senior Superbike Race on Friday 9th June, that’s it for TT 2016. Everything is checked, Dyno correct but still up against it with the suspension, it would have been hard to do anything in the race, could have been brilliant but has been pretty disappointing, we have a good starting point for 2017.”

Rob isn’t complaining at all about his TT debut, as he did over 122 mph on the Superbike and was in front of many a highly accomplished TT Races competitor in the opening Monster Energy Supersport race.

Rob offers his side of the events from the opening supersport race of TT 2016:

“The officials took the bike to one side and checked it’s fuel and gave it a Dyno test, they noticed the speed traps, I came back to camp, had a shower but by this time I started to wonder why it was taking so long, it was out of my hands.

It’s just been one of those unlucky years and with lots of negative reports on social media, regarding the Supersport Race.

As soon as anything goes on line, negative comments appear, I couldn’t do anything but put something out stating my point of view.

The day after PRF gave their statement, explaining the circumstance. I hope everyone understands and does not pass judgement but come and speak to me about it.”

The Southern 100 is Rob’s next race followed by the Isle of Man Classic TT, although nothing is presently confirmed for the popular meeting, plus potentially he could be set to make his debut, at the Ulster Grand Prix.

He has spoken to Paul Rennie at PRF Racing explaining whatever he decides to do, they will not fall out over what’s happened this week, but have a chat when he is back at home, so for now Rob has not officially split from PRF, just called it a day for TT 2016.

The build-up work rate has been brilliant, Paul and Carl Rennie have been there with support, helping with setting up, getting on the spanners along with PRF engineering run by their brother Derek, putting in a lot of time, effort and money which has all been appreciated by Rob.

“What they have done for me up to the TT and while I’ve been here, I can’t thank them enough, as well as all the other helpers.

Dave, Dad are always there and huge thanks to everyone, all the little things and jobs they do, for example, taking the bike to scrutineering, helps me prepare and saves a lot of time.

A big thank-you to Avon Tyres, Tony Morris and Simon Bleasdale SB Tuning who supplied the bike, for working on it through winter.”

Rob just feels at this moment in time, that he needs to apologise for not achieving more, but it wasn’t through the lack of trying.