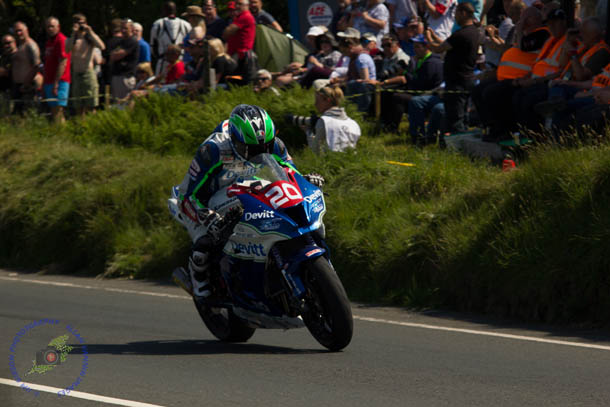 Yesterday’s race action on the Mountain Course, proved to be a challenging one for Devitt RC Express Racing.

For reigning lightweight TT winner Ivan Lintin, it was a case of a mixed bag in terms of results. The opening Monster Energy Supersport race saw Ivan showing high quality form early on.

Unfortunately on lap two, he encountered technical issues, forcing him out of contention. Next up was the Royal London 360 Quantum Superstock race, going into the pits at the end of lap two, Ivan was holding a top ten placing.

Then drama struck as he was issued with a time penalty, for exceeding pit lane speed limits. Despite dropping down the order and with the obvious disappointment of what had happened, Ivan battled his way through to 12th, during another record breaking race at TT 2016.

Commenting, on what could be considered a frustrating day of TT Races action, Ivan said:

“We fitted a new engine for the Supersport race and the bike was going well initially but on the second lap, it started to rattle a bit at Ballacraine and although it wasn’t terminal, it wasn’t wise to carry on so we decided it was better to be safe than sorry and retire.

I really enjoyed the Superstock race and although it would have been nice to have finished ninth, 12th place is still a good result for both the Devitt RC Express Racing team and myself. We had to slow down for yellow flags at the end of the Cronk y Voddy straight so to do a personal best lap under those conditions was very pleasing.

Speaking of what went wrong with his ZX10R Kawasaki mount, Alan said:

“The race started well and the bike felt good in the first couple of miles but when I was going up the Ballahutchin, my foot slipped off the foot peg and then it did it again when I changed from fifth to sixth gear.

I looked down and could see oil so I pulled off the course straightaway. It’s hugely disappointing and luck’s just not been with me this fortnight so I think I need to go down to Fairy Bridge to try and get some luck on board for the Senior on Friday.”

“We’re obviously a bit disappointed with the outcome of the 600cc race as we’d fitted a new engine and first impressions were that it was giving us that bit extra we needed.

However, there was an issue with it on the second lap and Ivan did the right thing by retiring at the pits. We had a second bite of the cherry today though with the Superstock race and we’re mega pleased with Ivan’s ride.

He’s posted his personal best lap of the course and although the limiter had been set to 57kmh, for some reason we got caught out and got hit with a penalty.

It’s a real shame for Ivan as he would have finished in a brilliant ninth place but for that although 12th is still a good result.

Unfortunately, Alan was out of luck today and he had to retire with an oil leak before his race had even started. On the miles he did do, he felt happy with the bike and was feeling loads better so he’ll be keen to make up for it in the Senior.”