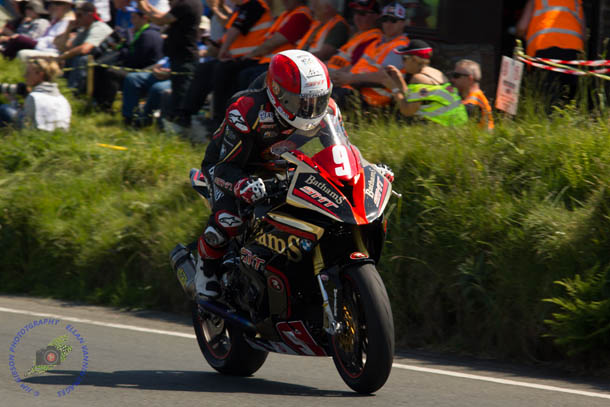 Four times TT winner Michael Rutter, was right near the sharp end of the Royal London 360 Quantum superstock race, as he finished a great fourth on the Bathams SMT Racing S1000RR BMW.

Battling throughout a podium finish, the final lap of the four lap race saw Michael set a new personal best lap speed of 131.118 mph, as he held off Gary Johnson for fourth place.

This result made up for the disappointment of retiring early from the opening Monster Energy Supersport race, at Ballacraine.

A top six finisher in the RST Superbike race, he’s amongst the most in form riders, at TT 2016. Tomorrow sees the pure road racing great in supersport and lightweight action, in particular he’s one to watch in the lightweight TT on the KMR Kawasaki.

Reflecting on yesterday’s competition on the Mountain Course, Michael said:

“I was a bit gutted with the 600cc race as I was looking forward to a solid ride but when I slowed down for the yellow flags at Greeba, I noticed water on my visor and so my race was over before it had begun.

It looks like the head gasket has gone but it’s just one of those things and I was able to get back out in the afternoon for the Superstock race.

I was disappointed with my first lap though and when I saw P7 on one of my signals, I started to think it just wasn’t working for me.

Dean came by me at Parliament Square and he actually hit me which almost had us both off but it woke me up and from there on in I had a good, strong ride. I could see from his signals that he was in second or third and although I was quicker than him in some places, he was quicker than me in others so I sat behind him until the last lap when I tried to pass him at Parliament Square.

There was a backmarker in front of us and I nearly took all three of us down!

I’m glad I pulled my finger out to pull myself up to fourth and to lap in excess of 131mph is very pleasing especially as we had to slow through yellow flags at the end of the Cronk y Voddy, losing a good few seconds.

I had a slight issue with the gearshifter not quite working properly when I was in first gear but aside from that the bike was a great so a big thanks to the Bathams/SMT Racing team for another good result at the TT.”