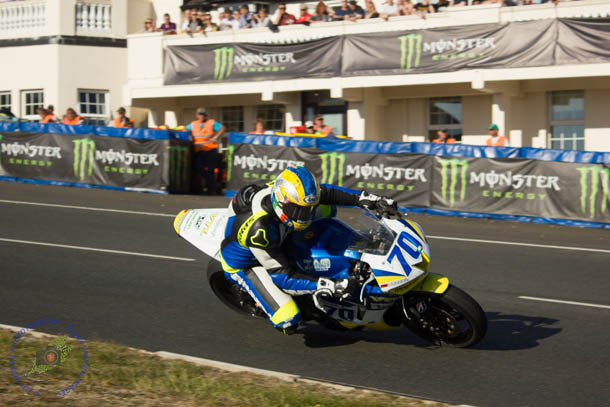 Rising star on the roads Brian McCormack, is gaining extra confidence on his TAG Racing/VTL Honda mounts, thanks to using Bridgestone Tyres.

Winner the opening superbike race at last years Faugheen 50 Road Races, Brian went into TT 2016, determined to move up a level around the Mountain Course.

He’s done this and more, lapping close to the 126 mph mark during practice week, establishing himself as one of the most improved competitors over the past ten days at the most famous road race in the world.

The late but great motorcycle journalist Aidan Lynam encouraged Brian to switch to Bridgestone Tyres, since making the switch, it has given the highly rated rider, the belief that he can this week become the Republic of Ireland’s fastest competitor at the TT Races.

Commenting on his association with Bridgestone at TT 2016, Brian said:

“A lot of people said I was crazy and there were some murmurings, but people are now coming up to me now asking for a set to test.

It could have been seen as a foolish move but I wanted to try something different. I’m sure Aidan will be smiling down at me if he sees the times I’m recording with Bridgestone. He’d be saying ‘I told you so!’

Bridgestone has restored my confidence, for definite, I never really felt relaxed on the bike, which is not the case any more. Stability is a big factor on any bike, let alone around here. I have so much more grip and stability on the Bridgestone tyres and I feel much more relaxed as a result.

My best year was in 2013 and I’m looking to better that. I’m hoping for a top 10 finish and want to become the fastest competitor from Ireland. That has always been a big goal of mine.”

Bridgestone’s Product Manager Gary Hartshorne added: “Brian is a class act, so to gain this feedback is a tremendous boost for us all. We have always been confident in our products and it is great to receive this sort of endorsement.

We’ll be right behind him in his efforts at the Isle of Man TT and hope he can reach his individual goals. He’s certainly got the raw pace and natural ability to do this and we wish him all the best.”

Yesterday saw Brian finish a more than creditable 23rd in the opening Monster Energy Supersport race, as he sealed a bronze replica finish.

Next Mountain Course action on the horizon for Brian, is tomorrow in the second Monster Energy Supersport race, then it’s the big one, the Pokerstars Senior TT on Friday.