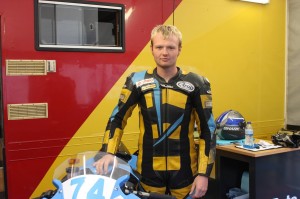 One of Phil Wakefield’s main ambitions for 2015 road racing season is a return to the North West 200. The up and coming road racer enjoyed excellent results at the 2014 Scarborough gold cup.

Which included 12th place finish in opening supersport race whilst supersport race 2 provided the R6 Yamaha mounted rider with excellent ninth position. Senior A races proved to be consistent ones for Phil who secured back to back 13th place finishes, feature race of the weekend the Steve Henshaw international gold cup saw the rider who enjoys competing around the mount produce a gritty all round performance.

12th position was achieved as he finished his weekends race action in solid and highly respectable style. Phil is planning on competing at the gold cup in 2015 whilst debut at the worlds fastest road race the Ulster Grand Prix is a potential possibility.

One of his career highlights to date in pure road racing has been 10th place finish in 125 race at North West 200 in 2010. He is looking forward to returning to action around the triangle next year where the potential is there for Phil to cause a surprise or two.