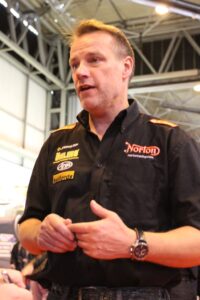 Norton is confident that long term they can return to the front at the Isle of Man TT. The man in charge of bringing the Norton name back to the TT Stuart Garner is greatly looking forward to TT 2015 where Cameron Donald will be piloting for second year in succession SG3 Norton in superbike and senior races.

Stuart is delighted to have the same team for Norton racing at TT 2015 with TT heroes Steve Plater and Mick Grant helping to push the team forward with its research and development. Their is potential for a two rider team next year whilst a first time entry into the lightweight TT is looking likely as Norton works alongside the British motorcycling academy.

Potentially in the future the iconic motorcycle manufacturer could return to the North West 200 and Ulster Grand Prix where Robert Dunlop in the early 90’s was involved in many a great battle for feature race victories when competing on JPS Norton.

By 2016 Stuart Garner is aiming for Norton to produce its own V4 engine for the Isle of Man TT. Currently the SG3 Norton features a V4 Aprilia engine, in TT 2015 the bike that Cameron Donald lapped at over 124 mph at TT 2014 is been updated across all areas which includes the chassis and the electronics. 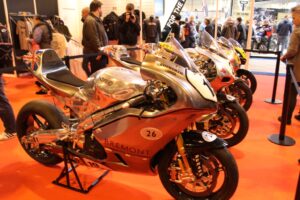 Norton’s last TT victory happened in 1992 when Steve Hislop was victorious in senior TT, Stuart Garner is confident that one of the most iconic names in TT history is not far away from ending their TT wins drought.