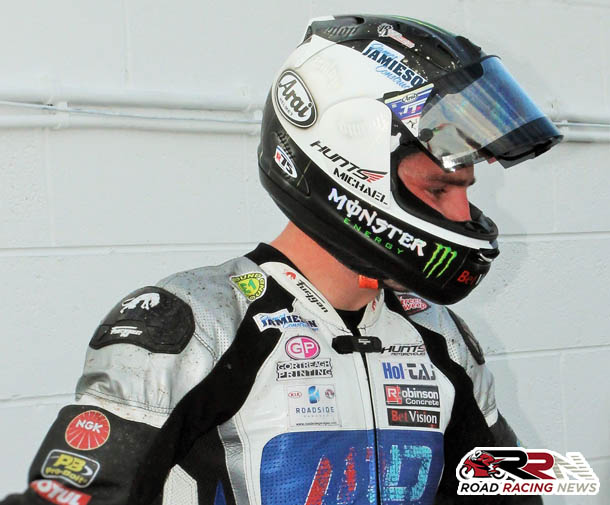 With BMW not retaining his services, 2015 would see Michael Dunlop undertake another new challenge, this time in piloting the new YZF R1M Yamaha, for the Milwaukee Yamaha team.

The Vauxhall International North West 200 would prove a poor one for Michael, by his standards. Battling for a top six finish in the opening superbike race, reliability issues struck the Milwaukee Yamaha, forcing him out of contention.

Prior to TT 2015, many where saying that all was not well in the Milwaukee Yamaha camp, rumours where circulating that Michael could quit the factory Yamaha team, even before practice week began.

Yamaha themselves had to convince Michael to compete on the YZF R1M Yamaha around the Mountain Course.

Despite what was going on in the background, when practice week began at TT 2015, he was in action on the Milwaukee Yamaha superbike.

However following a testing opening timed practice session on Wednesday, Michael made the decision that evening, to quit the Milwaukee Yamaha team.

His decision not only meant no competition on the teams superbike, but also on his MD Racing YZF R6 and YZF R1M Yamaha’s prepared by the team ran by Shaun Muir.

It’s fair to say there was all kind of talk from various around Michael’s ground breaking decision, in my opinion though he made the right decision. 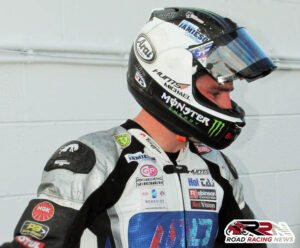 His machinery now for race week at TT 2015, would be Buildbase BMW superbike and his own teams CBR 600 Honda and S1000RR BMW.

Now armed with competitive machinery, he was immediately back on the pace on Thursday evening, topping the time sheets in superstock class, lapping close to the pace of front runners in superbike practice Ian Hutchinson and John McGuinness.

With the RST superbike race, delayed till Sunday due to high winds, the stage was set was for a superbike Sunday on the Isle of Man.

Despite the lack of time on the Buildbase BMW, Michael lead the BMW challenge, holding third position on the final lap, when drama struck.

Aiming to avoid Scott Wilson’s machine at the Nook, he crashed out of third place, Bruce Anstey was victorious for tenth time at TT Races, securing superbike TT success for the first time.

Just before the podium celebrations, Michael arrived back at the Grandstand, with what appeared just a limp.

In reality he had sustained hip and hand injuries, it was clear that the rest of TT 2015, was going to be ultra challenging for him.

Despite been in huge pain, he still competed in the opening Monster Energy supersport race, until reliability issues struck his own teams CBR 600 Honda on the opening lap.

Next up was the Royal London 360 superstock TT, although in obvious pain, he still went into the race, one of the prime favourites.

He lead by over two seconds going into the pits on lap two. Following the scheduled pit stop positions out front changed on lap three with Hutchinson moving into race lead.

From here the in form rider of TT 2015 established by the end of lap three a lead in excess of eleven seconds.

The rider from Bingley went onto secure a new race record, as he sealed his tenth TT victory, whilst for Michael Dunlop second place, was in it’s own way a victory for him, given the trials and tribulations prior to this race.

It would prove to be his only podium finish of TT 2015, Monster Energy supersport race two would see him a non finisher, whilst the blue riband senior TT, saw fifth place finish achieved, following a stunning final lap speed of 132.515 mph.

This lap speed made Michael the second fastest rider in TT history, plus the fastest BMW mounted rider at the most famous road race in the world, all despite the handicap of injuries sustained in the RST superbike race.

Without the hand, hip and leg injuries, who’s to say he would’nt have won the 2015 Pokerstars senior TT.

So that was TT 2015 for Michael Dunlop, without a doubt his most challenging TT Races to date.

It was a memorable two weeks competition around the Mountain Course for him, but this time not for the reasons, many would have imagined prior to TT 2015.

The rest of the 2015 pure road racing season, would see battling away on his own teams machines, main highlights of the season included retaining his race of legends crown at Armoy, plus open and grand final successes at Killalane.

Formula 1 race victory, at the classic TT, was another positive moment of otherwise an extremely testing season for the rider, regarded by many as the world’s leading pure road racer.