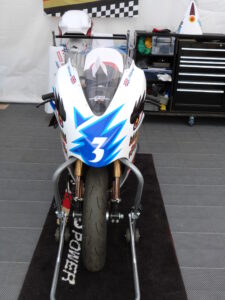 The TT zero race has up to ten riders competing on a variety on unique electric bikes. Mugen has a formidable line up with John McGuinness being joined in the team this year by nine time TT winner Bruce Anstey. Both John and Bruce are competing on the teams Shinden Ni bikes as both bid for their first TT zero wins.

Mark Miller won in 2010 the TT zero race and the rider nicknamed the thriller is competing for team Vercarmoto on a uniquely engineered R6 Yamaha. Team Vercarmoto from Italy are confident of securing a good result at TT 2014 and look set to have a good chance of securing a podium finish.

Rob Barber won the inaugural TT zero race back in 2009 and secured podium finish last year so Rob has one of the best records in TT zero class since the race began five years ago. Ohio state university are running Rob this year on Buckeye current rw-2.x, Shaun Anderson is competing for Kingston university and looks set to be battling a top result as does Paul Owen competing for Brunel university.

Russ Mountford and ARC ev engineering are aiming for a good result as is Neal Champion competing on a Brammo machine for Darvill racing. Tuukka Korhonen is competing for first time in TT zero race for Electric arena racing and Dave Moffitt leads Manttx racing teams line up.

James Hillier is a potential starter although James has not being confirmed yet with a team for the race. Mugen are aiming in 2014 TT zero race to lap at over 115 mph, the current lap record for TT zero class is over 109 mph by Michael Rutter last year, so it would be a big jump in lap speeds but Mugen are confident of achieving this and have two TT legends competing for them John McGuinness and Bruce Anstey.