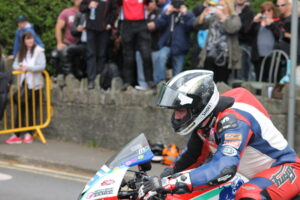 The second Monster Energy supersport TT race of 2014 began in good conditions all around the mountain course as everyone was anticipating another exciting race at this years Isle of Man TT.

Michael Dunlop lead the way at Glen Helen on lap 1 just in front of Bruce Anstey by 0.5 of a second, William Dunlop wasn’t far behind in third place whilst Dean Harrison occupied fourth place on Mar Train racing R6 Yamaha.

As lap 1 went on Dunlop on his MD racing CBR 600 Honda opened up the lead to over three seconds over Anstey as William Dunlop continued to be challenging in third place on Tyco Suzuki by TAS supersport bike.

Josh Brookes was impressing in fifth place for Milwaukee Yamaha as the opening lap of the race neared its completion.

Dunlop’s lead over Anstey was up to over 4 seconds whilst William Dunlop was challenging the Valvoline racing by Padgetts motorcycles rider for second place. As lap 1 finished Michael Dunlop had a 4.5 second lead over Bruce Anstey, William Dunlop held third place, Dean Harrison was fourth and Josh Brookes completed the top five.

Lap 2 at Glen Helen saw Dunlop up his advantage out front to over seven seconds, Bruce Anstey maintained second place and William Dunlop was still close by in third position.

Dean Harrison on Mar Train racing R6 Yamaha was producing another first class performance during TT 2014 which has seen the rider from Bradford prove a first TT win cannot be far away.

Bruce Anstey and Valvoline racing Padgetts motorcycles Honda was giving it everything in pursuit of Michael Dunlop who now had over nine second lead by the time both riders went through Cronk Ny Mona on lap two.

Pit stops where on the horizon at end of lap two which saw Dunlop have a lead of over 9.3 seconds over Anstey in second place. William Dunlop continued to hold third place in front of Dean Harrison who occupied fourth place.

After a fine pit stop Bruce Anstey trimmed Michael Dunlop’s lead out front to just six seconds. William Dunlop was third twelve seconds down on the leading duo, Dean Harrison completed the top four as we entered third lap of the race.

Lee Johnston on East Coast racing CBR 600 Honda held a strong top eight position on lap three as Dunlop’s lead over Anstey was back up to over 8.3 seconds as both riders closed in on Ballaugh bridge.

As third lap went on positions within the top five remained the same whilst Keith Amor competing in his second race at TT 2014 was producing a top performance holding top ten position on Site Sealants B&W racing CBR 600 Honda.

Michael Dunlop held a reasonably comfortable lead out front on lap three of over nine seconds as he homed in on a tenth TT win, which would take him level on wins around the mountain course with the likes of Giacomo Agostini and Stanley Woods.

Onto final lap of race and could Michael Dunlop make it ten TT wins, we would all soon know as both he and Bruce Anstey approached Glen Helen on lap four with the gap at the front remaining roughly the same.

By Ramsey hairpin with a lead maintaining of around the nine second mark Dunlop was well on his way to another victory on the worlds most famous road race circuit.

As both Dunlop and Anstey where quickly on their way to more success at TT 2014 Josh Brookes and Lee Johnston where both involved in a collision forcing both riders out of the race, this meant James Hillier was now up to fifth place on Quattro Plant Muc off ZX6 Kawasaki.

Michael Dunlop took the checkered flag on end of lap four to record his tenth TT victory. Bruce Anstey produced another fine performance at this years Isle of Man TT to finish in second place and William Dunlop was a brilliant third for Tyco Suzuki by TAS.

Dan Stewart recorded ninth place finish as Guy Martin rounded out the top ten and Michal Dokoupil secured a great top 15 finish in what was a race which saw a race long battle for victory between Michael Dunlop and Bruce Anstey.

Coming up on Friday is the race they all want to win the Senior TT and Michael Dunlop is confident in the potential of factory backed S1000RR BMW. 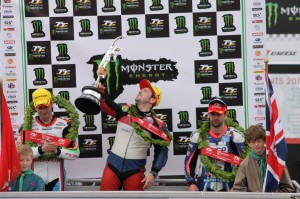 This years senior TT race could well see lap speeds of over 133 mph for the first time around the mountain course, but for now the main story of TT 2014 is the dominance that Michael Dunlop is showing, can anyone stop him in senior TT on Friday? we will all soon know the answer.