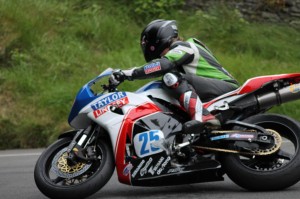 Ivan Lintin has had a top start to TT 2014. Ivan competing for Taylor Lindsey racing secured 17th place finish in Dainese superbike race after a strong ride throughout.

Ivan’s 2014 road racing season has being a great success thus far which has included being runner up in feature race at Ian Watson spring cup road races at Oliver’s Mount. The North West 200 saw second place finish in opening super twin race and then top six finish in second race.

The lightweight TT race is coming up on Friday and Ivan will start as one of the favourites for victory when competing on Mckinstry racing ER6 Kawasaki, next race coming up for Ivan is second Monster energy supersport TT race where he will be aiming for another good result to go alongside those achieved so far at TT 2014.