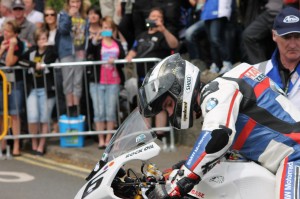 2014 Pokerstars senior TT race began in fine conditions as the blue riband race of the week was set to produce a thrilling, exciting and dramatic race.

At Glen Helen on lap 1 William Dunlop surged into a early lead on Tyco Suzuki by TAS superbike leading Conor Cummins by 1.3 seconds, Guy Martin was third 0.3 back on Cummins, Dean Harrison held fourth place only 2 seconds behind William Dunlop.

So only two seconds covered the top four riders to Glen Helen on lap 1, by Ballaugh bridge William Dunlop still lead but by only 1 second other brother Michael Dunlop on factory backed S1000RR BMW superbike.

Guy Martin moved into third place, Conor Cummins was fourth and Dean Harrison occupied fifth place as we entered the final stages of opening lap of the race.

Positions out front changed at end of lap 1 as Michael Dunlop moved into the lead for the first time leading Guy Martin by 0.8 of a second, Conor Cummins was nothing behind Martin in third place for Honda racing.

Whilst William Dunlop was now in fourth place in front of Dean Harrison at the end of a closely fought opening lap.

By Ballaugh bridge the lead out front was over four seconds then at Ramsey Dunlop pulled out the lead to nearly five seconds as pit stops beckoned at end of lap two.

As rider entered the pits the lead for Michael Dunlop at end of lap 2 was over eight seconds in front of Guy Martin and Conor Cummins who where closely contesting second place as William Dunlop was in fourth position.

A slow pit stop saw Dunlop’s lead over the chasing pack go down to only six seconds as Conor Cummins moved into second place in front of Tyco Suzuki by TAS duo of Guy Martin and William Dunlop.

Michael Dunlop was 4.5 seconds in front of Conor Cummins at Glen Helen, the Honda racing rider was on a charge as he gave everything in pursuit of Dunlop on the ultra fast S1000RR BMW superbike.

Guy Martin maintained third place 7.7 seconds back on the leader as the leaders homed in on Ballaugh bridge.

By this point the lead was out to over 6.2 seconds as William Dunlop was out of the race after a slip off on Tyco Suzuki by TAS, William sustained a broken leg but is ok we all wish him a very speedy recovery.

The rest of lap three saw positions out front remain largely the same although Bruce Anstey was beginning to challenge James Hillier for fourth place as the Valvoline racing by Padgetts motorcycles rider was on a charge.

By the end of lap three the lead for Michael Dunlop over Conor Cummins was over ten seconds, Guy Martin was over three seconds behind Cummins in third place and James Hillier held fourth place on Quattro Plant Muc off ZX10 Kawasaki.

Lap four beckoned and could Cummins stop Dunlop’s relentless charge to a eleventh TT win, we would soon find out as both riders got to Glen Helen on lap four where the lead for Michael Dunlop over Conor Cummins was 12.6 seconds.

Although Dunlop maintained a comfortable lead over Cummins on lap four the gap did come down slightly by the Bungalow as the two metre man go the gap at the front down to 9.9 seconds.

Then the gap came down to only 9.3 seconds where we on for another classic senior TT showdown it looked like we was as it was pit stop time again at end of lap four.

With a lead of over 9.5 seconds going into the pit Dunlop’s lead was shrunk marginally by Cummins who was now only six seconds down after a fine pit stop by Honda racing.

But then at Glen Helen the lead was back up to over 7 seconds and from here despite Cummins taking the gap at front down to six seconds at Ballaugh bridge, Michael Dunlop upped the pace to get the lead up to nearly ten seconds by end of lap five.

Conor Cummins remained in second place still with a chance of securing senior TT victory, Guy Martin was third and James Hillier occupied fourth place but was under increasing pressure from Bruce Anstey.

John McGuinness rounded out the top six and was proving despite a injured wrist that the TT legend can still mix it with the best even when carrying a injury.

So here we went onto the final lap and Michael Dunlop was in a commanding position to take his eleventh TT victory. The lead at Glen Helen on final lap was 11.2 seconds, Conor Cummins and Honda racing superbike where giving it everything to try and reel in the race leader.

Ballaugh bridge saw the lead down to ten seconds, at Ramsey hairpin Dunlop’s advantage over Cummins was back up to over 13.5 seconds.

By the Bungalow with a lead of 12.4 seconds Dunlop was set to make history in senior TT race becoming first rider to win four races in a week twice at the Isle of Man TT.

Michael Dunlop crossed the line at end of lap six to record 2014 Pokerstars senior TT victory. Conor Cummins finished in a great second place proving that he is well and truly back to his best around the mountain course. 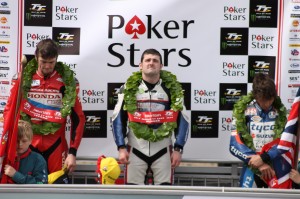 John McGuinness completed the top six to round off a at times difficult week for John who is now on 21 TT wins after TT zero race success on Wednesday. Josh Brookes finished in an excellent seventh place for Milwaukee Yamaha as Dan Kneen was eighth completing a excellent TT 2014 for the highly talented road racer.

Michael Rutter and David Johnson rounded out the top ten as Peter Hickman produced a stunning performance finishing in 11th place and producing a lap speed of over 129 mph on final lap of the race.

This makes Peter the quickest TT newcomer in history a truly memorable performance from the Ice Valley racing by Motorsave ltd rider.

But the race belonged to Michael Dunlop who became the first rider to have won four races in a week at the worlds greatest road race twice. The way he and factory backed S1000RR BMW superbike have clicked at TT 2014 has being nothing short of sensational.

In all its being a great TT 2014, Peter Hickman has proved in his TT debut that he is a potential race winner in the future, Conor Cummins is back to his best, Triumph are TT winners again and Conrad Harrison and son Dean Harrison are now TT winners.

Overall though TT 2014 has belonged to one man Michael Dunlop who at 25 years of age has won eleven races on the mountain course. Over the years at the Isle of Man TT we’ve seen all the greats of road racing at their best and at this moment in time Michael Dunlop is the best road racer in the world who no doubt has more TT wins to come.