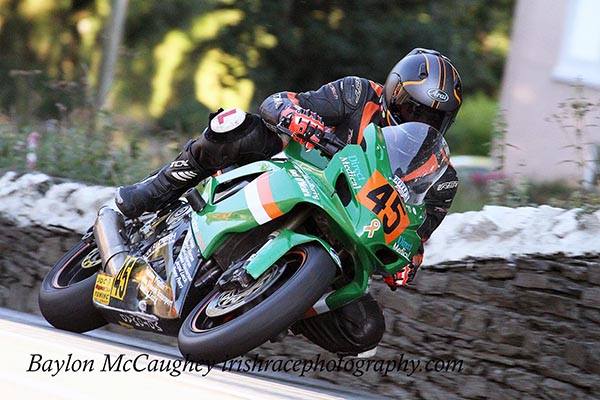 When you hang around motor cycle racers, there is always a desire to find out what the racing lark is all about, and this was no different for Athlones Damian Horan.

Having worked with Roger Maher for four seasons, He really got the buzz to race from their many adventures both at home, Europe and in the Isle of Man along with endurance racing in Le Mans .

Not surprisingly, Damian decided to have a go at racing, and did so on the ex Maher R1 Yamaha. Damian took to the circuits before progressing to the roads, making his debut at his local Walderstown meeting on board his 748 Ducati.

This was just the start of a dream which would lead on to Damian contesting more roads, with a dream of one day competing at the Manx Grand Prix.

Having been on the track now since 2010, Damian has contested the support class for a couple of years, before being upgraded to National status. Despite just having a 750 machine, which is the maximum limit for the Manx Grand Prix, and Damian admits to not being in the financial position to own a larger capacity bike just for the national roads here!

“It can be interesting at some races, racing against the bigger bikes” quipped a smiling Horan!

Last year at the KDM Hire Cookstown 100,Damian the proud recipient of the Trevor Ferguson Memorial Trophy, for being the Fastest 750 rider in the Senior Class at Cookstown. “Trevor was a modest rider, and one who enjoyed about his racing, and to me, this trophy was a very special win, something, that I am very proud of!”

Looking ahead to the KDM Hire Cookstown 100, Damian will again be riding his trusty 750 suzuki, alongside Dave Farrens SV Suzuki, Which gives the Longford rider more track time. Admitting, to doing the national roads, in preparation for the MGP Later in the year. 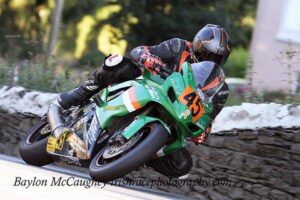 On his first visit to the island, Damian just missed out on a podium in the newcomers race, finishing in 4th place.

It may have been a long winter for many, but, the time was well used up, prepping the bikes and working hard to find the funds to keep him on track again for 2017.

“Big THANK YOU to my faithful and loyal sponsors, where would we be with out them? David Nelson of the North Armagh Club and Peter Boyle who sponsor my Northern races and without them It would be so much harder to do and be competitive.

And NOT forgetting Roddy Hayes who builds all his race engines to such a strong and high spec and is always there for advice.”