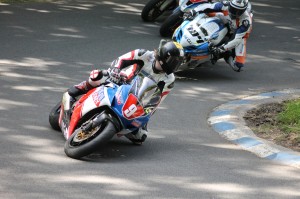 Throughout lap 1 Lintin maintained a adequate advantage out front whilst Harrison was now in front of Mathison for second place as he began his challenge for race victory.

Lap 2 saw positions out front remain the same but Lintin’s lead over Harrison came down slightly as Mathison continued to occupy second place.

Onto lap three and the race leaders continued to battle for race lead, the action out front had everyone engrossed around Oliver’s Mount.

By lap four the leading duo of Lintin and Harrison had stretched out a sizeable advantage over Mathison in third place, Mick Goodings wasn’t to far behind Mathison in fourth place whilst Mark Lister continued to impress holding fifth place. 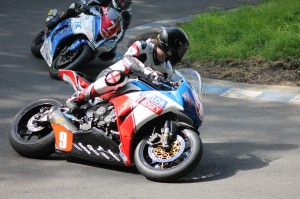 Lap five and Ivan Lintin despite being under constant pressure from Dean Harrison was continuing to lead out front.

With a half second lead at end of lap five Lintin had the advantage over Harrison going into final laps of the race. Daley Mathison competing on Hol Taj backed GSX-R 1000 Suzuki superbike was still in third place producing a fine performance.

Penultimate lap of race saw Ivan Lintin and Dean Harrison close together as they both fought it out for modern senior first leg race win at Barry Sheene road race festival.

Final lap of the race beckoned with at end of lap six Lintin holding 0.4 of a second lead over Harrison on RC Express racing ZX10 Kawasaki.

Going into Mere Hairpin on final lap drama struck as when being held up slightly passing a slower rider Lintin made a tiny mistake which allowed Harrison through into race lead. 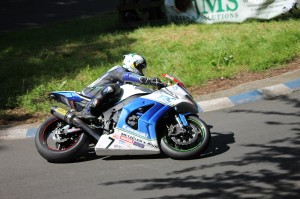 Matthew Rees secured a highly creditable top ten finish in a race which saw a brilliant battle for race victory between Dean Harrison and Ivan Lintin.