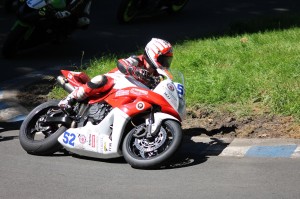 By end of lap 1 Cowton had over 1.5 second lead with Mathison in second place with James Neesom holding a good third place. Mick Goodings, Mark Lister and Tom Weeden where all closely matched as they held fourth, fifth and sixth place positions. 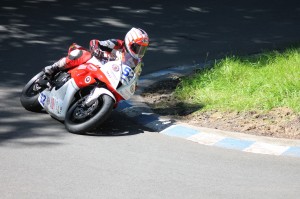 Fourth and fifth laps would see Cowton’s lead over Mathison and Neesom get larger and larger, soon Neesom was closing in on Mathison for second place until making a slight error at Mere Hairpin.

This meant that Daley Mathison now had a comfortable advantage over James Neesom in the battle for second place.

Lap six and a fine duel for fourth place was developing between Mark Lister and Mick Goodings with Tom Weeden also in close proximity.

Last lap but one and James Cowton was keeping up a consistent race pace judging the gap back to Daley Mathison perfectly as he homed in on another win around Oliver’s Mount where he is just getting faster and faster.

James Cowton crossed the line at end of final lap of the race to achieve modern junior 600 race 1 victory. Daley Mathison was a superb second whilst James Neesom rounded out the top three finishers.

Mark Lister recorded a fantastic fourth place finish in front of Mick Goodings and Tom Weeden who rounded out the top six.

Another great performance from James Cowton who is continuing his great form from North West 200 and Isle of Man TT.