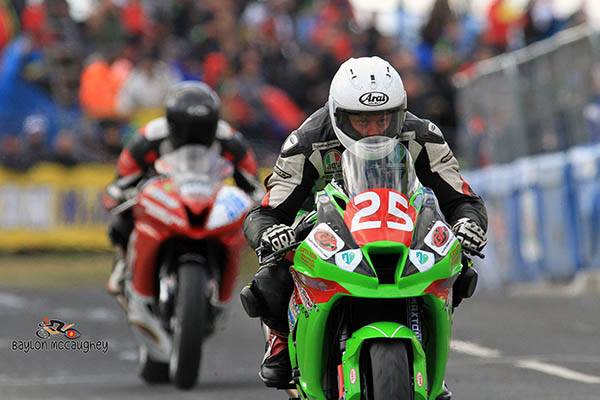 One of the nine Welsh competitors competing this year at the KDM Hire Cookstown 100 is returnee Matthew Rees.

The Aberdare rider is eagerly looking forward to his return to the Orritor circuit where he made his debut last year.

The former front runner in supermoto before turning his hand to road racing, has competed in the Manx Grand Prix, before moving to the IOM TT, where he has lapped at a respectable 123 plus, along with a lap of 118 plus in the Classic Manx TT.

Rees will be joined at Cookstown with his younger Brother Michael, who will make his debut when he competes in the support class.

It wasn’t all plain sailing for a young Matthew, who just loved bikes from a young age, following a nasty accident when he was six years old, which was followed by three months in a wheelchair, and a long road of rehabilitation, the Bikes were side stepped by his parents! But the passion for two wheels never left him, and when he turned sixteen, Rees bought a KDX 200 Kawasaki, and began riding in the Welsh mountains.

Feeling confident with his riding, the teenager soon found himself competing in Enduro and moto cross events. This soon led to Supermoto racing which was on the rise at the time, and on board his KTM650SMR, Matthew knocked in some impressive results.

Now that he had a taste for tarmac, he purchased a 600 Suzuki for track days, which soon convinced him, to go circuit racing! It wasn’t long before Matthew was mixing with the front runners, and his next goal, was to get his road race licence, so he could compete at his local event, the famous Aberdare Park races.

And that is where his Road Race dream began, Rees managed podium finishes in his early stages of his road racing career, and his next goal, was to compete on the Famous IOM TT Circuit at the Manx GP, where in 2014 he achieved his dream, when he started as #1 in the newcomers race.

In 2015 he achieved his International Licence, and went on to make his IOM TT debut. Last year Matthew competed at the KDM Hire Cookstown 100, and it was the Enthusiasm and camaraderie of the Irish fans that encouraged Matthew to compete in most of the Irish roads meeting’s last year. 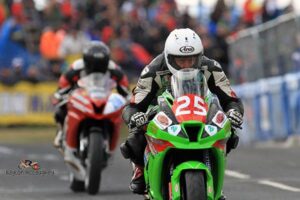 In Matthews words “I’m so really looking forward to participating in the Irish Road Racing Championship once again this year & will be racing at the KDM Hire Cookstown 100 for the second time.

Reflecting on some of my highlights from last year, include qualifying 11th at the UGP Super Stock, keeping up with Bruce Anstey for the first 3 laps until unfortunately the clutch went.

Lapping at 123.8 mph at the IoM TT and thoroughly enjoyed having the opportunity to race the TT Zero Electric bike for the University of Bath. Also lapping at 118.2 at the F1 Classic TT, qualifying in 10th position and had a number of podium places at my hometown race track, Aberdare Park.

As always I appreciate the chance to say thanks to my hard working team, including my super supportive girlfriend Danielle and loyal sponsors M&N Motors Cookstown.