Suzuki are confirmed to once again be title backers of the Barry Sheene Festival meeting, at Oliver’s Mount.

The motorcycle manufacturer has a great affinity with Scarborough, largely due to Barry Sheene’s feats with their machines in the 1970’s and early 1980’s.

Barry’s 1976/1977 world championship winning machines, are set to be on display for the whole of the meet named in his honour, which runs from the 22nd to the 23rd of July. 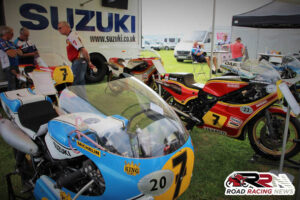 “Oliver’s Mount Race Circuit has enjoyed many battles on the track over the years and many were provided by Barry Sheene, Steve Parrish and a whole host of other Suzuki mounted riders.

It was therefore important to us to retain Suzuki as a circuit partner and continue with the title sponsorship of the Barry Sheene Festival.

We are excited that Suzuki will continue to title sponsor the Barry Sheene festival and we are looking forward to our relationship continuing for many more years to come”.

“We’re both pleased and proud to continue our association and sponsorship of the Sheene Festival at Oliver’s Mount.

While this is the third year that we’ve backed the event through our Vintage Parts Programme, 2017 looks set to be bigger than ever, as we celebrate 40 years since Barry’s final World Championship victory.

The crowd and customer interaction at this is event is overwhelming and it’s certainly a highlight for us and everyone involved in the Suzuki Vintage Parts Programme. We look forward to seeing some familiar and new faces at this year’s event.”