Ulster Grand Prix Qualifying Round Up 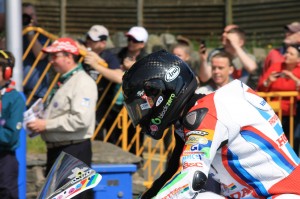 Bruce Anstey produced a fine lap speed of 133.1 mph to top the time sheets in combined superbike qualifying at 2014 Ulster Grand Prix. Valvoline racing by Padgetts motorcycles rider Bruce has shown once again the amazing talent that the Ulster Grand Prix and Isle of Man TT lap record holder has.

Dean Harrison is fourth fastest overall on Mar Train racing R6 Yamaha, James Cowton lead the way in 250 qualifying lapping at 110.911 mph in what has being a brilliant day of qualifying sessions at the worlds fastest road race.