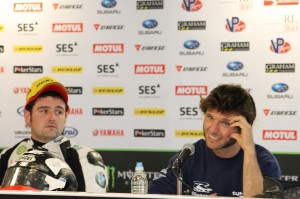 Lee Johnston was fifth overall on East Coast racing CBR 1000 Honda Fireblade lapping at 130.307 mph, Ian Hutchinson completed top six with lap speed of 129.8 mph proving that Hutchy is getting closer to being back at his best.

Ulster Grand Prix Qualifying Round Up