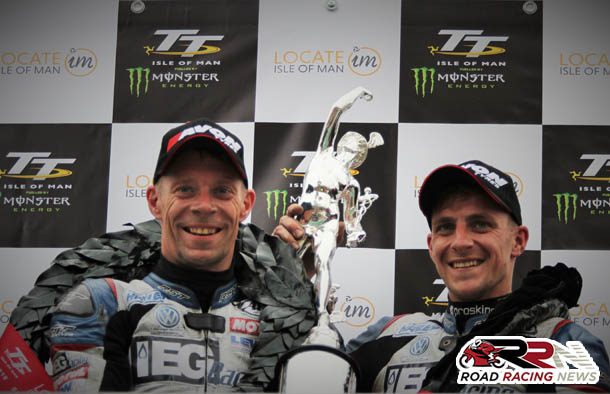 The re started Locate.im Sidecar race produced a mix of thrilling three wheel racing of the highest order, moments of Mountain Course history and a string of incredible laps from a selection of the world’s finest drivers/passengers.

Headed at Glen Helen in the original start of the race by John Holden/Lee Cain, it was roles reversal in the re start as the Birchall brothers Ben & Tom surged into a race lead, leading Holden/Cain by just over two seconds.

From here the formidable IEG (International Energy Group) backed crew section by section, steadily increased their advantage out front which by the Bungalow grew to almost ten seconds.

Come the completion of lap 1, it was confirmed that the Birchall’s had broken their own existing lap record, having lapped the fabled Mountain Course from a standing start at 117.502 mph. 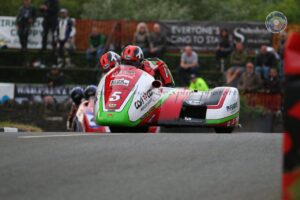 Whilst Manx TT legends Dave Molyneux/Dan Sayle holding throughout lap 1 a top six placing, retired at the completion of the lap.

The Birchall’s relentless rapid pace continued on lap 2 growing their race lead to plus 16 seconds at Glen Helen, then up to over 20 seconds at Ramsey Hairpin.

Again on lap record breaking pace, what lap time would they clock across the start line at the completion of lap 2? 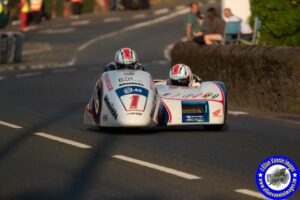 The answer another new lap record, this time a quite stunning lap speed of 118.694 mph, the first time in TT history that a driver/passenger combination has lapped the Mountain Course at over the 118 mph mark, a truly groundbreaking moment not only the Birchall’s but also for Sidecar racing in general.

Easing off their pace but only ever so slightly! Ben Birchall/Tom Birchall did all what they had to do on the third and final lap to take their tally of TT successes to seven.

Crossing the finish line just over 47 seconds clear of John Holden/Lee Cain, the Mansfield duo firmly cemented their reputation as been amongst the true TT greats of the modern era. 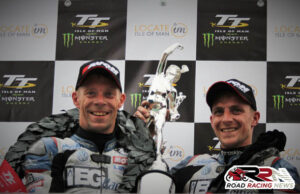 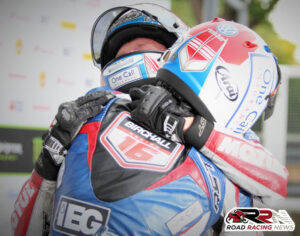 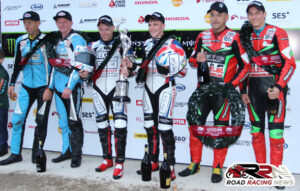