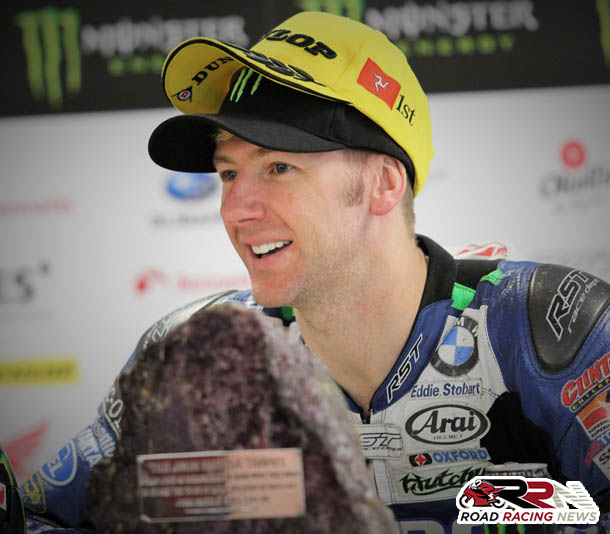 After a day of persistent rain and high winds, the rescheduled Royal London 360 Quantum Superstock race, graced the Mountain Course, from 10:45 AM, with David Johnson aboard the Fleetwood Grab Services BMW, getting the four lap race, underway.

Bathams SMT Racing’s Michael Rutter headed Ian Hutchinson by just over a second on lap 1 at Glen Helen, with Peter Hickman close behind on the Smiths Racing S1000RR BMW.

Hutchinson stormed into race lead at Ballaugh Bridge, overhauling Rutter to lead by 0.247 of a second, Hickman in third, made it just over half a second behind the S1000RR BMW mounted trio. 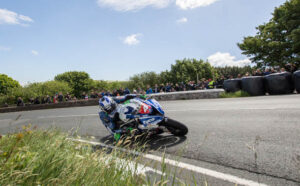 The rest of the opening lap of the race saw Hutchinson ease out a reasonable advantage, by the Bungalow. His lead stood at close to the 3.8 seconds mark over Rutter, who at Cronk Ny Mona, dropped to third, as Hickman, moved into second.

By the end of lap 1, Hutchinson’s lead was 4.535 over Hickman, with Rutter third, only 0.17 behind the two times Macau GP winner.

Lap 2 would prove a case of Ian Hutchinson, gaining a firm stranglehold on this years Superstock TT. Nine seconds clear at the Bungalow, the Bingley Bullet was taking control out front.

Peter Hickman second, got the gap down to 6.744 at the completion of lap 2, you could tell though, that he would face an uphill task to record a first TT victory.

Behind the leading duo, Dan Kneen moved in front of Michael Rutter to occupy third, with five seconds separating them, as the scheduled pit stop loomed.

Dean Harrison was maintaining a solid fifth, whilst Michael Dunlop in sixth, was extracting the maximum out of the all new GSX-R 1000 Suzuki. 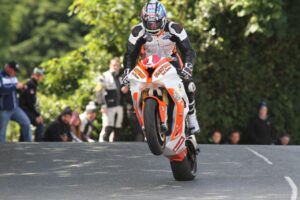 Following the pit stops, Hutchinson increased his race lead at Glen Helen on lap 3, up to in excess of 13 seconds.

Hickman in second place, was chipping away, as in previous races, increasing his pace as the race went on.

It was proving though, mission impossible even for the on top form three time international road race winner.

Going onto the final lap, the gap between the leading protagonists, stood at 12.413, with Dan Kneen in third, on course for a maiden podium finish.

Michael Dunlop who had a rapid pit stop, at the end of lap 2, was up to fifth, just in front of Dean Harrison, but 3.5 behind his good friend, Michael Rutter.

Producing a textbook, ultra smooth top draw lap speed of 131.639 mph, the fastest of race week thus far at TT 2017, Ian Hutchinson crossed the line on the fourth and final lap, to secure a 16th TT victory, his fifth in the Superstock class.

Peter Hickman in second place, kept up his record, of finishing at least on the podium in every race he has completed during race week. 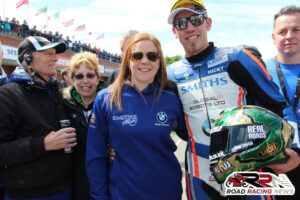 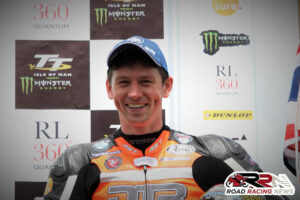 Michael Dunlop, dropped back to sixth, still it has to be said given the power advantage of the BMW’s and Kawasaki’s, it was still a world class performance from the 14 times TT winner. 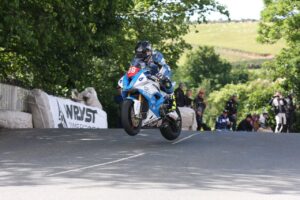 Lots of people prior to this race, tipped Ian Hutchinson for a third successive Superstock TT victory. 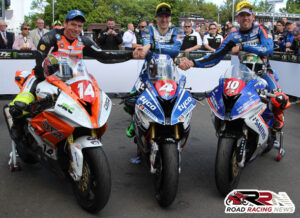 Underling his status, as a firm pre race favourite, Hutchy showcased yet again, why he is considered one of the leading pure road racers, of the modern era.

Two wins from two starts, with his Tyco BMW steeds, can he make it a hat trick for Hector & Philip Neill’s outfit, on Friday in the Pokerstars Senior race? 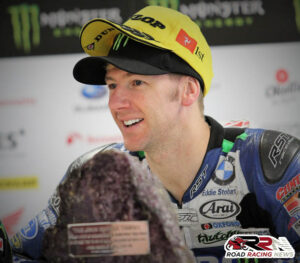 It’s going to be tough for the now 30 times international road race winner, one things for sure though, he will be in strong contention, for a second Senior TT title.