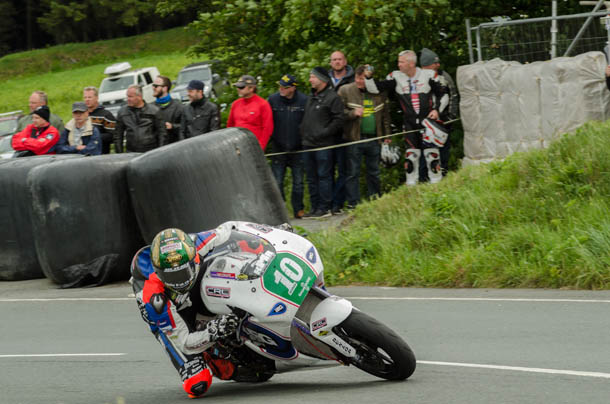 Two times Macau GP winner Hickman, although a relative newcomer to Super Twins machinery, went into the race, as arguably the most in form rider at TT 2017, having wrapped up a brace of podium finishes in the Superbike, opening Supersport and Superstock races.

Steadily increasing his pace, by the end of lap 2, he was into fourth place, following Stefano Bonetti’s retirement at Creg Ny Ba. 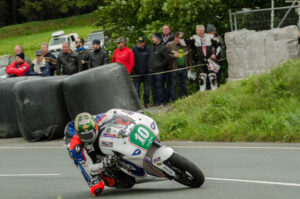 He soon overhauled reigning Lightweight TT champion Ivan Lintin for third on lap three and from here, kept up an accomplished pace, to record a fourth successive podium finish.

Speaking after the race, Peter said:

“We changed the bike completely before the race, different engine, different forks, different gearing, everything – but it ran perfectly so full credit to KMR Kawasaki for doing a great job.

I was a bit steady on the first lap and when Stefano Bonetti came by me, it affected my rhythm a bit as his bike was faster in a straight line but I was quicker through the corners. I got by him again and got my head down so to finish third and take my fourth podium of the week is brilliant.

A big thanks to Ryan and the team for all their hard work and also to Alan and Rebecca Smith for letting me ride the bike.”

Finishing in front of none other than 14 times TT winner Michael Dunlop, the former fastest newcomer in TT history, stated about his achievement:

“It’s taken me a while to get dialled back into the Mountain Course and the lack of track time in practice hit me harder than most so it wasn’t until the final session that I got out on the KMR Kawasaki.

The Lightweight bike requires a different technique to the bikes I’m used to riding and with it being a last minute deal riding for Ryan, I didn’t get much time on the bike but we moved forward all the time.

I’ve really enjoyed working with Ryan and he gave me a great bike so it’s really good to pay him back with a good result.”

“It was obviously a great shame to have Lee and Danny ruled out after injuries sustained during practice week but I’m absolutely over the moon with the results today.

Peter jumped on the bike and after not much practice, we made a lot of changes prior to the race which paid off and a podium is brilliant. Josh didn’t have much time either so to lap at 119mph and finish sixth is superb so a big thanks to both riders, I can’t praise them enough.

After a great North West 200, it’s brilliant to have such great results here at the TT so a massive thank you to all the team for all their hard work and also to my loyal sponsors for their continued support.”