Barry Sheene road race festival would prove to be a highly prodigious one for the talented rider as he achieved excellent fourth and fifth place finishes in supersport races. Whilst opening modern senior race saw sixth position recorded following a consistent and solid all round performance from the 675 Daytona Triumph mounted competitor.

Cock of the north road races began with the rider who has been a top five finisher at Aberdare park road races achieve fifth place finish in opening senior A race as he proved once again his undoubted ability in wet/damp conditions. 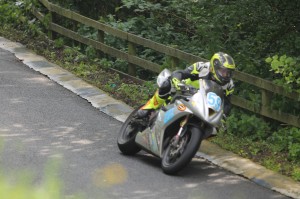 The second senior b race would prove to be one of arguably the main highlights so far of his pure road racing career. First win around Oliver’s Mount was recorded as he battled his way to the front and on the final lap passed three times TT winner Ryan Farquhar to secure a well deserved first win around the mount. 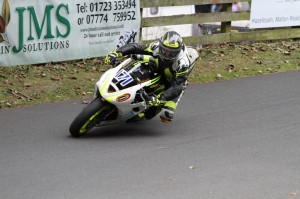 After his first win around the road race circuit known to many as a mini TT Tom went in confident into feature race of the weekend the Steve Henshaw international gold cup that a standout result was on the cards.

Seventh position was acquired as he finished leading 600 mounted rider as 2014 action around Oliver’s Mount finished positively for a rider tipped by many to be a future gold cup winner.

Alongside competing at the mount next year Tom is planning on returning to the North West 200 and Manx Grand Prix and is on the lookout for sponsors to help him continue his rapid progression in pure road racing.