After another great year for Rob ‘The Bullet’ Barber and PRB racing, it has been a year of firsts also as we welcomed our first racer (other than Rob) into the team Rob ‘Dynamo’ Livesey. The Bullet also completed his first year as the official ACU coach for Preston & District Motorcycle Club.

As a result of the coaching the team changed their mind set towards racing and took a much closer interest in other racers and their backgrounds. We were amazed at the depth of talent and the backgrounds of the racers, so we started to look for riders that would most benefit from our help.

Two riders stood out above most though not just their sheer speed and talent but their professionalism and on and off the track. When we got to know them we found that they responded well to advices and they instantly gelled with the rest of the team (even helping Rob at the Ulster GP). So PRB racing have decided to expand for 2015 from the two Rob’s to 4. The team would like to welcome Martin ‘Gingertron’ McGrath and Mike ‘Strawberry’ Norbury (The Young Guns).

Our plans for next year; for both Rob’s is similar to 2014 with Irish Road Racing, the TT, UGP, Manx GP. The main focus for The Young Guns will be to accelerated there learning curve and for them to gain their national Race license before August so they can complete at the Dundrod 150 races at the Ulster Grand Prix. PRB racing will field a 4 rider team at the UGP. We feel with The Bullets great track record and the professionalism of the UGP organisers it will be the idea place for The Young Guns to get their first taste of road racing. 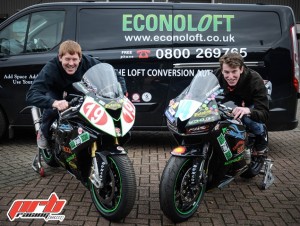 A few details of ‘The Young Guns’

Mike ‘Strawberry’ Norbury
Mike is 20 years old and is an apprentice bike mechanic for Astley. After saving for some time, working two jobs and 60+ hour weeks, he eventually saved enough money to obtain his race license and buy a 1990 Honda VFR400 to race on. After a rocky start to his first meeting (racing in the wet on road tyres). Mike went from strength to strength dominating the 400 and forgotten era classes at the PDMCC, Aintree, and Tonfanau meetings he entered, braking class lap records along the way. We put Mike on one of our 600 for the last 3 PDMCC newcomers races and Mike exceeded all expectation by winning all but 1 of the races. Mike Won the PDMCC Forgotten Era and 400 Championships and finished 3rd in the Newcomers Championship.
https://www.facebook.com/NorburyRacing
benly@live.co.uk

Martin ‘Gingertron’ McGrath
Martin is 26 years old and is a qualified Electrician from Atherton. Martin only started riding motorcycles 4 years ago. He visited the Isle of Man TT in 2013 and loved his experience. Due to his desire to race the mountain course, he converted his 2005 Honda CBR 600RR road bike into a race bike to go racing. In his first race meeting in very tricky wet conditions, he dominated both newcomer races. Since then he has shown great spirit (after a few spills) to stay strong and consistent throughout the year to become the PDMCC Newcomers champion.
https://www.facebook.com/MARTINMCGRATHRACING
maccamcgrath@hotmail.co.uk

As is clear neither of these riders have any outside help and have achieved incredible results. PRB racing believe with a little luck these could be the next Bruce Anstey and John McGuiness. PRB racing are going to leverage some of their sponsors to help these guys but as it’s clear these young lads need better financial help as they can’t do this alone. Their main cost will be Entry Fees, Tyres, and fuel so we are looking at way that people can get involved? Rob Barber is looking at run a fund raising night (if he can get enough interest)
We do have some more exciting news coming about Rob ‘The Bullet’ Barber and his next challenge so stay tuned.
https://twitter.com/@bullet39
https://www.facebook.com/rob.barber
http://instagram.com/Bulletgsxr39#