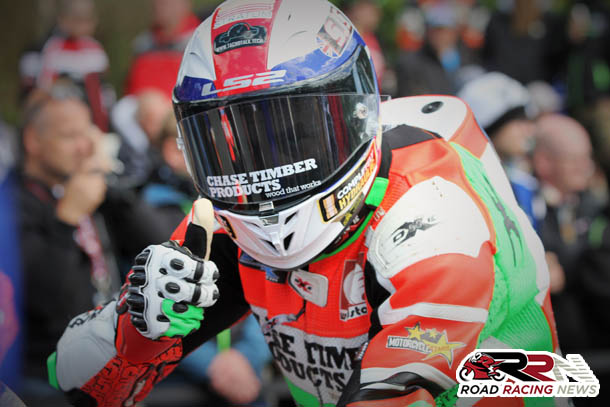 Aiming to compete in the solo and Sidecar races at TT 2019, 2009 Senior Manx GP winner Michael Russell is the next racer to take on Road Racing News, ten questions challenge.

The lead Privateer in last years Senior Classic TT, answers to the popular series of questions, are as follows:

“For me it is the TT course Manx Grand Prix. Not because your a big fish in a little pond or anything like that I just really respect what they do as a club and bring on guys that have the ambition to race the famous TT course.

The Manx is a superb event and long may it continue bringing on the future talent.”

“It has to be the fans, they certainly are enthusiastic about the whole thing, a lot more so than guys you see rock up to watch short circuits unless your at Assen.

They make it for me on the roads as they live everything with you, wander around the paddock and pop in to say hello.

They have made the homage to get over to the island because of their passion for bikes, and the racing and its great to get them involved with the team as it grows.” 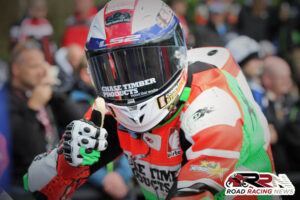 “Defo TT, North West was a great experience and I would love to go back and take on the Ulster, as I haven’t made it as yet but my passion is for the TT course. Bloody love it I do!.”

“Ivan Lightning Lintin, he was the reason I got into road racing and has been a great mate along the way with it, and I am always very proud of his achievements and look forward to seeing how he gets on where ever he races. For a little Lincolnshire lad he is a proper ledge.”

“I have been very fortunate in my career to win two Manx GP’s, run in the top 3 at the TT and be top privateer at the TT.

But for me my best roads moment thus far was my first ever lap of the TT course it is something that will always stay with me.

I had just returned from Iraq 2 weeks prior, hadn’t ridden a bike in nearly a year and borrowed a GSXR to race the Manx. I hadn’t ever been over to the Island and only managed to do a few laps in a car before my newcomers lap.

I was lucky enough to set off with Chris Palmer, 3 back from him, he set off pulling a monstrous wheelie almost to the top of Bray.

The two in front were dog slow and Chris kept having to slow up and by Ballascary I went past these two lads, Chris looked back and shrugged his shoulders and we just went, me and two others clung on to him it was a mega blast and he is a boy.

Hopefully some three wheel action will be the same when I get out on one around there and live up to my first lap.”

“Hmm tough one, I would love to see one on the Isle of Wight maybe. Similar sort of event to the TT could work well and potentially better weather.”

“Of course there are so many that trip off the tongue, they are all heroes to me but I love Michael Rutter he is what I would love to be like.

So smooth, super fast, understated, modest and a real gent and he is like a fine red wine just gets better with age.”

“Couldn’t tell you I have never ridden either all of mine a road bikes with suspension but I do go well on the little bikes.

Not sure why, maybe it’s a mental thing where you just have to be smooth and piece everything together well otherwise you lose momentum and time.

Would love a go on both Supersport and a Superbike one day, but for now I will do what I can with what I have got.”

“Got to say pole position, you on that day are the fastest guy out there and people know you are sat on the front of the grid for that reason.

Besides get a good start and I will set a fastest lap in the race!.”