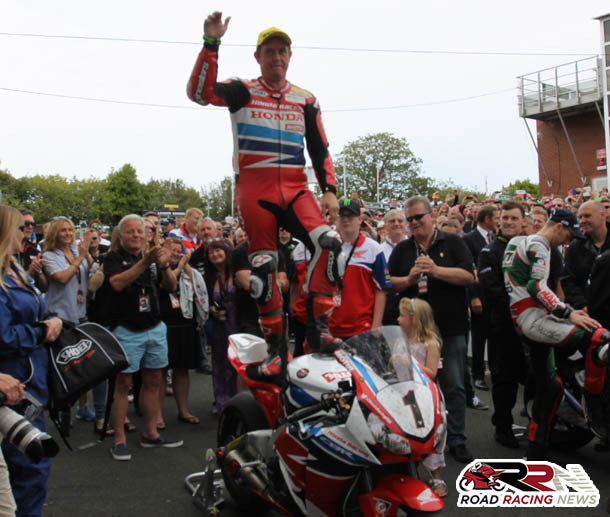 The restart of the 2015 Pokerstars senior TT began with James Hillier going into race lead at Glen Helen by 0.860 over John McGuinness in second position with Paul Bird Motorsport’s Ian Hutchinson not far behind in third.

By Ballaugh Bridge Hillier’s lead was down to 0.412 of a second as 11 times TT winner Ian Hutchinson moved into second place just 0.277 in front of third placed John McGuinness.

At Ramsey Hairpin Quattro Plant Kawasaki rider Hillier grew his advantage to 0.645 over John McGuinness who moved back in to second in front of Ian Hutchinson.

It was all change by the Bungalow as John McGuinness went into race lead by 0.497 over James Hillier with Ian Hutchinson 0.3 behind the 2013 lightweight TT race winner.

Onto Cronk Ny Mona and John McGuinness advantage at the front was up to 0.711 over Ian Hutchinson who was back in second position in front of James Hillier, there was nothing in it between the first three.

Onto Ballaugh Bridge and John McGuinness competing on Honda Racing’s proven superbike race lead was down to 1.433 seconds as Ian Hutchinson was showcasing once again his dazzling TT 2015 form.

The gap out front was back up though by Ramsey Hairpin to 1.962 seconds, James Hillier in third was eight seconds back on the leading duo of McGuinness and Hutchinson.

Guy Martin moved into fourth place as he showed without a doubt his best form so far of TT 2015 on Tyco BMW’s superbike.

At the Bungalow John McGuinness increased his lead slightly to 2.381 seconds, Ian Hutchinson in second was giving it everything in pursuit of the 22 times Isle of Man TT winner.

The gap out front was reduced slightly to 2.075 seconds as Hillier continued to hold third in front of Martin, Anstey and Dunlop. 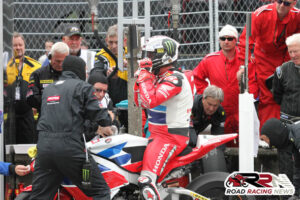 End of lap two at the pit stops saw John McGuinness confirmed to have broken the outright TT Races lap record with an astonishing lap speed of 132.701 mph. After losing time at Signpost Corner Ian Hutchinson in second was now 10.969 seconds behind the Morecambe missile.

Onto lap three and at Glen Helen with a race lead of 12.343 seconds John McGuinness was proving once again why he is considered one of the all greats at the most famous road race in the world.

The race leader’s advantage grew by Ramsey Hairpin to 13.230, Michael Dunlop holding sixth position was showing true grit and determination still feeling the after effects of an incident in RST superbike TT race.

Rest of lap three proved to be highly productive for John McGuinness who by Cronk Ny Mona had a comfortable race lead of 16.574 seconds over Ian Hutchinson. James Hillier maintained third position in front of Guy Martin, Bruce Anstey and Conor Cummins who finalised the top six.

Onto the final lap and at Glen Helen with a 19.745 seconds advantage John McGuinness was in full control of the 2015 Pokerstars senior TT.

The lead grew to 23.445 seconds at Ballaugh Bridge, James Hillier moved into second place as Ian Hutchinson was experiencing issues on Paul Bird Motorsport ZX10R Kawasaki, the rider from Bingley was 0.997 behind.

Ramsey Hairpin saw James Hillier’s second position become more secure as he held a 4.126 seconds advantage over Ian Hutchinson in third. John McGuinness’s race lead was at 18.854 seconds by the Bungalow as he homed in on his seventh senior TT victory.

Through Cronk Ny Mona and Governors Dip he went on lap four John McGuinness was in touching distance of his 23rd victory at TT Races.

He crossed the line at the end of lap four to record his 23rd TT victory following one of his best ever performances around the mountain course.

James Hillier second place finisher proved why he is considered by a multiple TT winner in the making, James lap speed on final lap was a superb 132.414 mph. 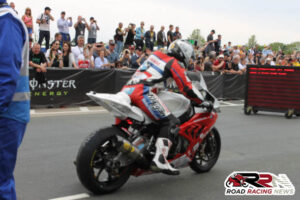 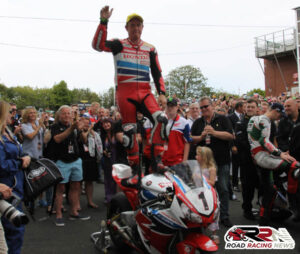 A truly stunning senior TT, four riders lapped at over 132.3 mph in what was one of the best senior TT’s seen for many years.

Regarded by many as one of the all time great pure road racers John McGuinness has shown once again why he is a master of the mountain course.

Arguably his performance today was his best since senior TT victory in 2007 when he became the first rider to break the 130 mph barrier.

Overall a fabulous two weeks racing at TT 2015, hat trick of wins for Ian Hutchinson back to his very best after all he’s been through, Bruce Anstey at last a superbike TT winner, Ben Birchall/Tom Birchall’s sidecar TT wins.

Plus now John McGuinness producing one of the all time great TT performances setting a new outright lap record in the process with a magnificent lap speed of 132.701 mph.