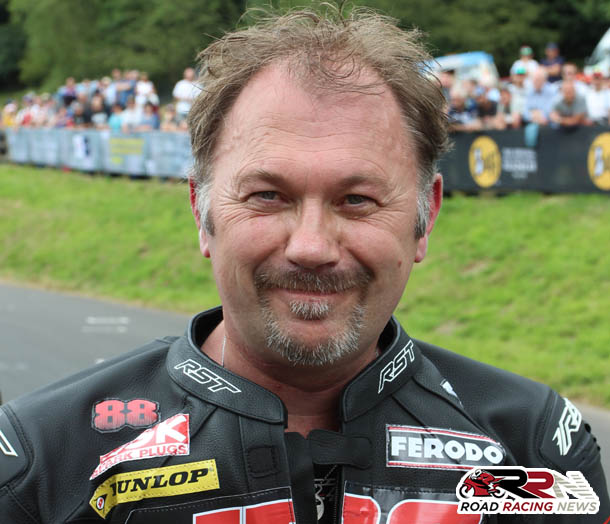 In a racing career of over 30 years, Garry Dickinson is a true pure road racing stalwart, on and off the track.

A great competitor on two stroke machinery, he has been involved over the years, in many a thrilling race on the roads. 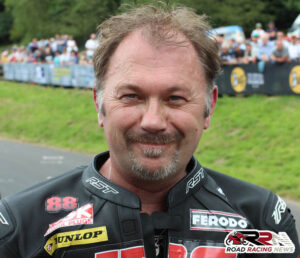 When asked what his favourite memory is from his pure road racing career, Garry said:

“I have my great memories from racing on the roads during my career, the one that stands out the most would have to be the 1998 NW 125 race.

First night’s practice I qualified fourth, I knew I could go quicker and we made some changes for the Thursday practice the changes worked and I ended up second quickest.

The race started and I was battling with Robert Dunlop, Owen McNally, Paul Robinson and Chris Palmer, the red flag came out following an accident involving Darran Lindsay and Phelim Owens.

It started for a second time and again we were slip streaming each other all the time, then another Red flag can’t remember what that was for my memory is dreadful.

Third time of asking we set off for the third time, and the battle resumed then as we approached the link road, Davy Lemon clipped Robert & sent him hurtling into a lamp post and the red flag went out again.

I felt that day I could have won that race, I was riding really well and the bike was flying.

When you are racing with other great riders it is just awesome, as you know you can trust them one hundred percent.”

One of the great things about pure road racing, is the integrity of the sport.

We never like to hear terms like, outside of regulations, or not within the regulations spouted. Some of the things said in this year’s senior TT press conference gave hints of these specific topics.

Having competed on the roads for multiple years, it was interesting to hear Garry’s view on what went on in that press conference.

Garry’s opinion on it all is:

“Well Hutchy didn’t do himself any favour at all by throwing his toys out his pram he just come across a bad loser. He embarrassed himself, his sponsor’s and team, if I was the team manager I’d have had some strong words afterwards with him.

He made a decision to swap motors, which didn’t work. Michael made up twenty seconds on the roads, and just dominated throughout. That will have totally destroyed Hutchy, he acted totally inappropriately.”

Following the 2016 senior TT press conference, it left many people wondering about the second Monster Energy supersport race, many people online in recent months, have been stating opinions, as to whether it had been won in the correct sporting manner.

Garry’s forthright view on this controversial topic is:

“Concerning that particular issue, I think there is, or there was no smoke without fire.

Cheating boils my blood big time I get so frustrated at the organisers as they just exclude who ever the culprit is and that’s it all forgot.”

Garry then went onto state, that there needs to be a bigger disincentive to stop possible things like this happening in pure road racing, for instance a big fine or a two or three year suspension.

In recent years we have seen multiple eye catching lap speeds around the Mountain Course, Triangle and Dundrod.

Since he retired from racing, it was interesting to find out Garry’s perspective on whether the standard of racing on the roads has gone up, since he last competed.

“I wouldn’t say that the standard has gone up in fairness, the top riders has always been good. What has changed since I retired from racing though, is.

The technology has advanced so much, as has tyres, suspension and other components on the machinery. Add the circuit improvements and you see speeds rising all the time.”

The final question that I asked Garry revolved around the 70th Scarborough Gold Cup meeting, coming up soon at Oliver’s Mount.

I had to ask who he is tipping for gold cup victory, Garry said:

“Oliver’s Mount, what a great circuit to race. Without a shadow of a doubt it’s has to be Dean Harrison going on his performances this year and at the other road events.

I recall about four years ago whilst spectating at Oliver’s Mount, I watched Dean in the 600 race and he was so much faster than the others, plus he was super smooth.

When I returned to our caravan I said to my girlfriend Jax “Just watched a star of the future on the pure roads just now”.

Dean just gets better all the time & he’s a top lad as well with his feet firmly planted on the floor. If I was a team manager of one of these works team, I would be knocking on his door to sign him. Dean will just get better & better.

He is a young man with a very bright future ahead of him, and I take some impressing!”