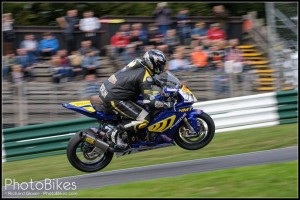 Multiple UK Club Championship winner Phil Crowe is preparing for a busy schedule during the 2014 season. The man from Market Rasen is set to make his debut at the famous Isle of Man TT circuit this year, as well as the Dundrod Circuit for the fastest road race in the world, the Ulster Grand Prix.  As if the race schedule were not enough, Crowe also plans to develop young motorcycle talent through his Lincolnshire based PCR Motorcycle Developments company.

Phil has announced that he will continue with his short circuit commitments with Thundersport GB in the GP1 class and selected British Superstock 1000 rounds, but the main focus in 2014 will undoubtedly be the roads campaign.

“It’s an exciting time for me” said Crowe. “While I will continue with the short circuit commitments, my focus and aim has always been to develop on the roads and this year I will make my eagerly anticipated debut at the Isle of Man TT and Ulster Grand Prix,” said the Lincolnshire rider.

“My plan is to run in the Superstock, Superbike and Senior class at the TT and I will be returning to the North West 200. Oliver’s Mount remains part of the race schedule for me this year and I am looking forward to running the BMW S1000RR at Dundrod, a circuit that I have always wanted to race,” said Crowe.

“I am pleased that I can now finally announce my plans for 2014. It’s been a very productive few months engaging existing and new sponsors, so that we could formulate a solid plan for the 2014 season. With Three new circuits on the schedule, it is going to be exciting for all involved.”

“Additionally I am really looking to build on the plans to support young racing talent and inject something back into the sport. We have some exceptional riders that we are working with, including bright young stars Tom and Tim Neave, who I believe have a very promising future. If I can help them along the way, it will be extremely rewarding,” said Crowe. “I am also working with Carl Simpson who is already demonstrating his skills and talents on the bigger machines. He will only improve and get faster this year.”

“I have prepared carefully this year for the TT and Ulster, with some sound advice from experienced road racers. With the strong package behind us, I will be looking to be at the sharp end of the newcomers. The Dundrod circuit will certainly suit my riding style and I will be hoping for a high end finish at Ulster. For the team and everyone supporting me this year, I would personally like to thank all my friends, family and sponsors, without which, none of our 2014 plans would have been possible.kj So a big thanks to PCR Motorcycle Developments, Holbeach Motorcycle Tyres, B&C Express, Fleetwood Grab Services, Objektum Modernisation, Astle BMW, WK Bikes, Merlin Leathers, Arrow Exhausts, Renthal and Tsubaki.”