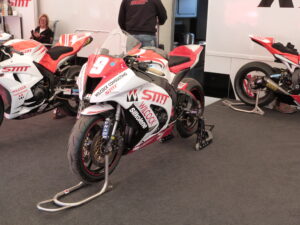 SMT racing and Dan Stewart are both looking forward to TT 2014. SMT racing are running Dan in the superbike and senior TT races on a CBR 1000RR Honda, Dan is Kawasaki mounted for the superstock race and is again on Honda machinery for the supersport races. TT 2013 saw Dan achieve a 9th place finish in the senior TT race along with top ten finishes in both supersport races, Dan lapped at TT 2013 at over 129 mph making Dan one of the top 15 fastest TT riders of all time.

Dan in 2012 won the TT privateers championship plus Dan in 2010 finished in the top six in the senior TT race, 2011 saw Dan achieve another top six finish this time in the superbike race. Dan Stewart is a hugely talented rider at the Isle of Man TT, SMT racing where runners up with Michael Rutter in 2013 at the Macau Grand Prix, both Dan and SMT racing go into TT 2014 confident that standout results are more than possible.