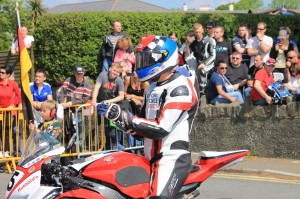 Michael Russell has a great record on the mountain course. Michael made his Manx Grand Prix debut back in 2007 competing for Mckinstry racing and since then has gone from strength to strength on the legendary road race circuit.

2010 saw him compete for the first time at the Isle of Man TT where he went onto secure highly creditable results, TT 2011 proved to be a consistent one for Michael with more good results achieved including 21st position in Pokerstars senior TT on Top gun racing ZX10 Kawasaki.

In 2013 the enthusiastic road racer made a return to competition at the Manx Grand Prix. Second position was recorded on Ducks Cross racing R6 Yamaha in junior race following a gritty, determined and battling performance.

Super twin’s race was next up and it would prove to be a hugely memorable race for Michael. His second win around the mountain course was achieved as the rider competing on Track electronics backed ER6 Kawasaki edged out Michael Sweeney for victory by under two seconds. 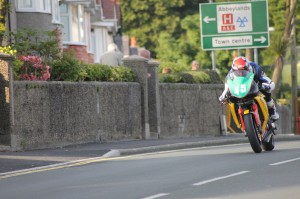 Looking to TT 2015 the 2009 senior Manx GP winner is greatly looking forward to competing once again on the most famous road racing circuit in the world where he is one of a select group of riders who been two time Manx Grand Prix winners. 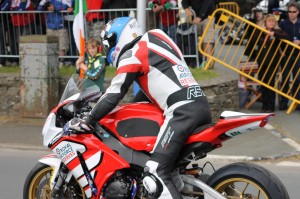