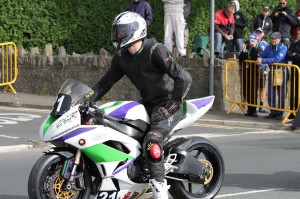 Tom Robinson is aiming for high quality results in the 2015 road racing season. 2014 saw Tom compete for the second time at the Manx Grand Prix, although a crash in junior race ended his 2014 MGP participation early personal best lap speed of 116.313 proved he has the potential for podium placing’s at the hugely popular road race.

On his debut at the Manx Grand Prix Tom recorded excellent sixth place finish in newcomers a race, alongside competing around the mountain course the rider who enjoys going road racing has recorded in recent years series of highly creditable results around Oliver’s Mount plus has enjoyed a productive Southern 100 debut back in 2013.

This years Cookstown 100 saw him secure second place finish in senior support race whilst senior support at Tandragee 100 saw Tom achieve race victory one of his main achievements to date in his road racing career.

For 2015 he is set to compete on a ZX6 Kawasaki and SV650 Suzuki at Manx Grand Prix plus making his debut’s at the North West 200 and the worlds fastest road race the Ulster Grand Prix.