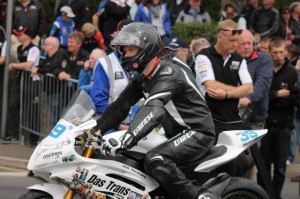 Alan Bonner is planning to return to the Isle of Man TT in 2015. Alan made his debut on the mountain course at TT 2014 competing on the peoples bike team backed R6 Yamaha.

The 2010 Irish road race senior support champion secured highly productive results in both Monster energy supersport races. Supersport TT race proved to be a consistent one one for the rider who has lapped at the Ulster Grand Prix at over 128 mph, 46th place finish was achieved as he finished his first TT race in respectable style.

Rated highly by many Alan is set to be Kawasaki mounted for TT 2015 in superbike, superstock and senior races alongside competing at North West 200 and Ulster Grand Prix.

Around Dundrod in recent years the ultra fast pure road racer has produced many impressive performances which include 7th place finish in Dundrod 150 challenge race from 2012, in 2013 during practice sessions for the Ulster Grand Prix he cracked the 128 mph lap speed barrier.

Before TT 2014 Alan had been aiming to make his TT debut for many years, now this ambition has been realised he is looking forward to competing in 2015 on the most famous road racing circuit in the world, the mountain course.