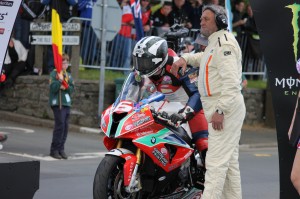 Royal London 360 superstock TT race began in good conditions around the mountain course. At Glen Helen on lap 1 nothing separated Michael Dunlop, Dean Harrison and Gary Johnson as all three battled for lead of the race.

But then drama struck as Gary Johnson had a slip off, Gary is reported to have fractures, we wish him a speedy recovery.

Michael Dunlop now had over eight second lead over Dean Harrison now in second place whilst Bruce Anstey, James Hillier and Conor Cummins where all in close attendance in what was becoming a tight race for final spot on the podium.

By the end of lap 1 Michael Dunlop had a 6.6 second lead over Dean Harrison, Bruce Anstey was third, James Hillier was fourth, Michael Dunlop’s opening lap speed was 129.588 mph.

Throughout out lap two positions within the top three remained the same but it was clear that Dunlop and his own teams MD racing S1000RR BMW where gaining more time on Harrison as race went on.

As riders entered the pit stops the question was could anyone stop Michael Dunlop today in Royal London 360 superstock TT race. Dean Harrison and RC Express racing had a good pit stop as Dean was looking to reel in Michael who now had over 15 second lead.

David Johnson and PR racing ZX10 Kawasaki where producing one of the rides of the race holding top ten position and battling for a position in the top six. Guy Martin soon hit mechanical problems on Tyco Suzuki by TAS superstock race after a solid ride throughout.

Conor Cummins pit stop went quite slow to be put it mildly which meant the two metre man had dropped a couple of places having held fourth place at end of second lap of the race.

Now into fourth place was Michael Rutter but the Bathams BMW rider was under pressure from Conor Cummins determined to make up lost time after pit stop and David Johnson riding brilliantly on PR racing ZX10 Kawasaki.

Having made his TT debut back in 2011 Dean Harrison is quickly proving why he is such a naturally talented rider and his ride today in superstock TT race proves even more why he is rated so highly.

By the end of lap three Michael Dunlop had a firm grip on the race with a twenty second lead over Dean Harrison. Bruce Anstey was third, Michael Rutter fourth, Conor Cummins fifth and David Johnson rounded out the top six.

Onto final lap and at Glen Helen the lead remained a comfortable one for Dunlop looking for his second win at TT 2014. Harrison and Anstey remained in second and third place positions, whilst Conor Cummins moved back into fourth place on RAF Reserves Honda.

At Ramsey hairpin the gap at the front was trimmed down slightly by Dean Harrison but Michael Dunlop still had over 16 second advantage as we entered final stages of the race. 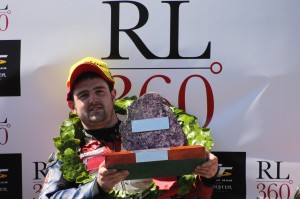 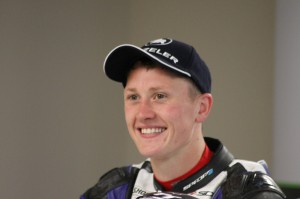 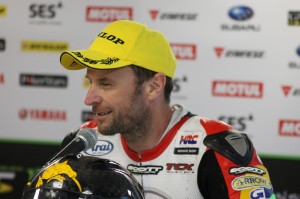 David Johnson was a sensational fourth on PR racing ZX10 Kawasaki, this is David’s personal best finish on the mountain course whilst for PR racing its also their best finish at the worlds greatest road race.

Michael Rutter finished in seventh place, Dan Kneen was a good eighth on Cookstown/Burrows engineering GSX-R 1000 Suzuki in what has being a top TT for Dan who secured 11th place finish in Dainese superbike race.

Peter Hickman’s TT debut is getting better and better, 9th place finish in front of twenty time TT winner John McGuinness proves that Hicky no doubt has the talent to become a multiple time TT winner.

The Ice Valley racing by Motorsave ltd riders lap time on final lap was over 126.5 mph. John McGuinness completed the top ten, despite being further down the order than people expect it was a great effort from John who is still getting over a bad wrist injury from winter.

Russ Mountford was a fine thirteenth for Silicone engineering racing, Ivan Lintin secured 15th place finish and Jimmy Storrar made it back to back 16th place finishes at TT 2014 competing for Penz 13.com BMW.

Another top race at TT 2014 which has seen Michael Dunlop secure another TT win. Victory today is Michael’s ninth triumph at Isle of Man TT and there is no doubt there’s more wins to come for maverick.

At only 25 years of age Michael has won as many TT’s as the late but great David Jefferies. With second Monster energy supersport TT race, Lightweight TT and Senior TT race coming up could we see him gain his tenth TT victory by the end of race week, time will tell but there’s no doubt that at this moment in time he has well and truly mastered the mountain course.