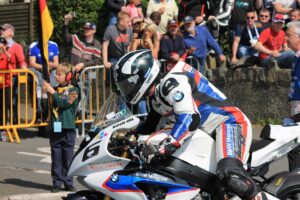 The Dainese superbike TT race for 2014 began in bright sunny conditions all round the mountain course. At Glen Helen on lap 1 James Hillier competing on Quattro Plant Muc off Kawasaki superbike took the lead by 1 second over Michael Dunlop on S1000RR BMW.

As opening lap went on though Dunlop hit the front and was pulling away on the factory backed BMW superbike, Guy Martin was soon into second place in front of James Hillier whilst Conor Cummins was showing good form moving in the top five.

At the end of lap 1 it was confirmed Michael Dunlop had broken the outright lap record with a lap speed of 131.730 mph. Michael lead Guy Martin by 9.4 at the end of opening lap of the race, Conor Cummins was now into third place whilst James Hillier was fourth on Quattro Plant Muc off ZX10 Kawasaki.

Gary Johnson was early retirement and Bruce Anstey overshot the Nook in what was a entertaining and drama filled opening lap.

Onto lap 2 and Dunlop’s lead over Martin was now over the 11 seconds mark as both riders went through Glen Helen. Conor Cummins maintained third place in front of James Hillier as Michael Rutter was showing great form on Bathams S1000RR BMW superbike in battling for fourth place.

By Ramsey Michael Dunlop pulled out a slightly bigger advantage over Guy Martin, Conor Cummins was keeping pace with Martin and Michael Rutter was now into fourth place in front of James Hillier.

Soon it was time for first pit stops of the race, as Dunlop headed into the pits he had set another new outright lap record with lap speed of over 131.9 mph. Guy Martin was still in second place but now over 16 seconds down on the factory BMW Motorrad rider.

Conor Cummins still held third place and wasn’t far off the pace of Martin on Tyco Suzuki by TAS superbike. Bruce Anstey after his mishap on lap 1 was now charging his way through and into the top eight as we entered lap 3.

After pit stops positions within the top six remained largely the same, Michael Dunlop a reasonably comfortable 15 second or more lead over Guy Martin who was keeping Conor Cummins at bay in third place.

John McGuinness was battling away in fifth place on lap three showing true grit and determination after sustaining a bad wrist injury earlier in the year. Michael Dunlop on lap 3 got the lead up to over 19 seconds, the rider nicknamed Maverick was in one of the most determined moods we’ve seen from the seven time TT winner.

Guy Martin was maintaining second place but it was clear that despite giving it everything Dunlop’s BMW had the edge today on the Tyco Suzuki by TAS rider.

Peter Hickman occupied a top 20 position on lap 3, Ice Valley racing by Motorsave ltd rider Peter has adapted so well to the mountain course and is enjoying competing at the worlds greatest road race.

Lap four beckoned and Dunlop’s lead got bigger and bigger over Martin and Cummins. Dean Harrison was in fine form on RC Express racing ZX10 Kawasaki holding a top eight position and proving why he is one of the most naturally talented road racers in the world.

Rising star James Cowton had a slip off but fortunately was ok in what was a race which saw reliability as a big factor but there was no reliability worries for Michael Dunlop who was fast charging to his eighth TT win.

When entering the pits on lap four the leading trio of Dunlop, Martin and Cummins all had good pit stops whilst Michael Rutter was still holding fourth place in front of 20 time TT winner John McGuinness.

After pit stops on lap four everyone was ready for the final two laps of an ultra fast and competitive 2014 Dainese superbike TT race.

Lap five and Martin had got Dunlop’s lead out front down to twenty seconds but the BMW rider was riding to his pit signals and maintaining as expected a very fast pace.

Conor Cummins maintained third place on Honda racing superbike on lap five, Conor was producing his best performance in a superbike race around the mountain course since his big accident back in 2010 over the mountain.

Bruce Anstey was getting quicker and quicker on Valvoline racing Padgetts motorcycles CBR 1000 Honda Fireblade and was into the top six. Michael Rutter still held a top five position whilst John McGuinness continued to battle away.

So as we entered the final lap of the race Michael Dunlop held a twenty second lead over Guy Martin who was over four seconds in front of Conor Cummins in third place.

There was no changes at Glen Helen on the final lap as Dunlop and Martin where close together on the road, Bruce Anstey on lap six was on lap record pace throughout the lap, could the lap record go for the third time today? an answer would be known soon.

Through Ramsey went Dunlop and Martin both keeping each other in view as both where set for fantastic results. Michael Dunlop crossed the line on final lap of the race to record his eighth TT win and back to back superbike TT wins.

Guy Martin was a good second whilst Conor Cummins finished in a fine third place for Honda racing.

Bruce Anstey finished in fourth place and set a quite remarkable new TT lap record with lap speed of 132.298 mph. Michael Rutter was a brilliant fifth for Bathams BMW whilst William Dunlop rounded out the top six. 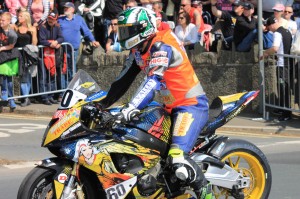 Danny Webb’s TT career began with 37th place finish and his first lap speed of over 120 mph, a good performance in his first TT race from the KMR Kawasaki rider.

So what a race which saw a new lap record, lots of riders doing personal best lap times and BMW achieving their first TT win in 75 years. Michael Dunlop’s win today also means the S1000RR BMW superbike which he won on will be going in BMW’s museum in Germany. 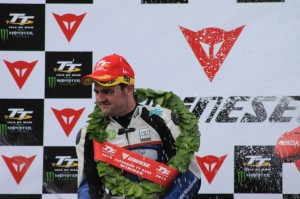 Over the years we’ve seen all the top road racers compete at Isle of Man TT with them all showing how good they are the top of the their game. Michael Dunlop is on top at this moment in time, another piece of road racing history has being achieved by Micky D today, a first BMW win in 75 years, can Michael make it senior TT win on Friday?

We will all know on 6th of June where Michael firmly believes the lap record could go again.