The second leg of modern senior race at the Barry Sheene road race festival saw Dean Harrison who had elected to ride on Mistral racing ZXR 750 Kawasaki get a fine start to lead into Mere Hairpin on lap 1.

As opening lap of race went on Harrison’s lead over Mathison and Lintin increased slightly, at the end of opening lap Dean Harrison had a half second advantage over the chasing pack. 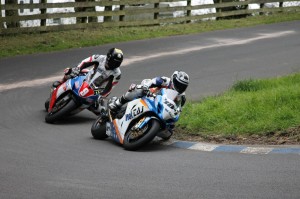 At end of lap three Daley Mathison lead Ivan Lintin as the leading duo pulled out a decent advantage over Dean Harrison in third place on Mistral racing ZXR 750 Kawasaki.

On lap four Ivan Lintin took the lead of the race over Daley Mathison, 2014 TT privateers champion Ivan was in determined mood looking to continue his excellent form during 2014 road racing season.

Daley Mathison now in second place continued to challenge Lintin for the lead on lap five as Dean Harrison maintained third place and had a fairly big advantage over Mick Goodings in fourth place.

Mick Goodings would soon have mechanical issues which meant Mark Lister was into fourth place and leading supersport 600 mounted rider in the race. 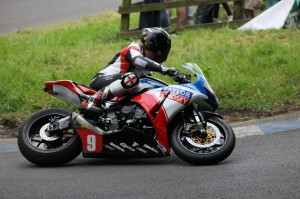 Now leading by a good margin over Daley Mathison by end of lap six Ivan Lintin looked set to achieve another win around Oliver’s Mount.

And so it was to be as talented road racer Ivan made it two wins in a day at Barry Sheene road race festival and his third win overall at the popular meeting at Oliver’s Mount.

Daley Mathison finished in a superb second place, Dean Harrison produced a dazzling performance for Mistral racing coming home in third position. A remarkable ride from Dean given the bike he was competing on is twenty two years old compared to the modern 1000cc bikes the current lightweight TT winner was up against.

So a top way to round off an excellent Barry Sheene road race festival at Oliver’s Mount. Ivan Lintin, Dean Harrison and Ryan Farquhar all secured a hat trick of victories after two days of exciting and entertaining racing.