Second leg of modern junior 600 races at Barry Sheene road race festival began in like on Saturday good conditions all around Oliver’s Mount. 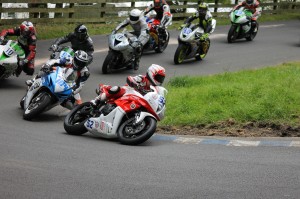 By the end of lap 1 Cowton pulled out a decent advantage over Mathison in second place, James Neesom held third place, Mick Goodings was fourth and Tom Weeden completed top five competing on a 675 Daytona Triumph.

Laps 2 and 3 saw James Cowton extend his lead out front over Daley Mathison, with a lead of now over two seconds the rising road racing star was proving to everyone that without a doubt he is a future Isle of Man TT winner.

By half distance of the race Cowton’s lead over Mathison continued to steadily increase, Neesom still held third place pulling away lap on lap over Goodings and Weeden.

5th and 6th laps saw positions within the top six remain the same although Daley Mathison was still giving it everything to try and reel in James Cowton for modern junior 600 race 2 victory. 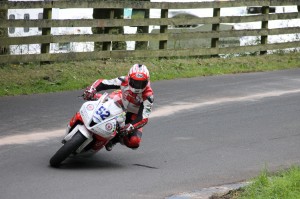 But James Cowton despite having lead trimmed to down to under two seconds was in the end a comprehensive race winner on his own teams CBR 600 Honda.

Another good race around the iconic road race circuit that is Oliver’s Mount. James Cowton’s wins in both modern junior 600 races are further proof that James is having arguably at this moment in time the best season of his career, 2014 has seen the rider who won 2013 newcomers C at Manx Grand Prix achieve North West 200 and Isle of Man TT podium finishes.