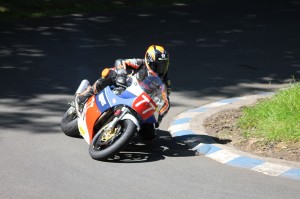 Ryan Farquhar secured his 100th win around Oliver’s Mount today at the Barry Sheene road race festival. Competing on a 500 Paton Ryan got his day off to the perfect start with victory in opening 500cc classic race, next race up for the three time TT winner was opening Geoff Barry trophy race.

Harris Yamaha mounted Ryan produced a highly accomplished performance to record a remarkable 100th victory at Oliver’s Mount. Over the years the road racing hero has won pretty much everything there is to win around the iconic road race circuit.

Which includes Scarborough gold cup victory in 2011, Darran Lindsay trophy winner in 2009,2010 and 2011 and multiple Ian Watson spring cup and cock of the north race victories.