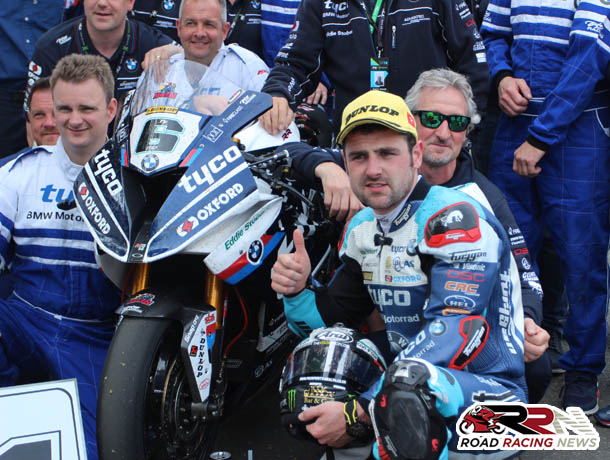 After a one hour delay due to a mix of mist and low cloud embarking upon the Mountain Course, the opening race of TT 2018 the six lap RST Superbike race provided international road racing of the absolute highest quality.

Making a quite rapid start, it was Silicone Engineering Racing’s Dean Harrison who moved into an early lead at Glen Helen on lap 1 leading Michael Dunlop by 3.71 seconds.

Top three positions remained unchanged at Ramsey Hairpin but Bradford’s Harrison on record breaking pace upped the advantage out front to nigh on eight seconds.

Stop watches were firmly at the ready at the completion of the opening lap with many realising the existing lap record was going to be absolutely blitzed.

As race leader Harrison crossed the line, you could sense the great atmosphere from the grandstand who cheered hugely the reigning Duke Road Race Rankings champion, who from a standing start lapped at a quite astonishing 134.432 mph.

This lap speed made Harrison not only the now outright Mountain Course lap record holder but also the first racer in history to lap at over the 134 mph mark.

The record breaking lap speed gave Harrison an advantage of just over 11 seconds over Michael Dunlop, whilst the battle for third saw Conor Cummins move into third place.

Race leader Harrison’s pace did not relent on lap 2 as the TT 2018 practice week leader, by Ramsey Hairpin upped his growing impressive advantage to plus 17 seconds.

Michael Dunlop though in second, was steadily getting into the groove on the Tyco BMW Superbike. By the end of lap two he brought Harrison’s lead down slightly to 16.3 seconds.

Following their scheduled pit stops, positions within the top four occupied by Harrison, Dunlop, Cummins and Hillier remained the same on lap 3 but one thing did change, the gap at the front was narrowing.

Tyco BMW’s Dunlop following a decent pit stop got his head down and began to step by step nibble away at Harrison’s race lead.

At the first timing point at Glen Helen, the race lead stood at plus 16 seconds, by Cronk Ny Mona it was down to just over 13 seconds.

By the completion of lap three, Harrison’s stood at 11.523, second placed at present Dunlop was firmly on a charge.

Onto lap four and Harrison’s lead was down to under five seconds at Ballaugh Bridge, the stage was set for a gripping final few laps of Mountain Course competition.

But then drama struck as Harrison retired from race lead at Sulby Cross Roads with clutch problems. The Silicone Engineering Racing riders misfortune allowed Dunlop to move into a now extremely proficient race lead of now nigh on 39 seconds over Conor Cummins. 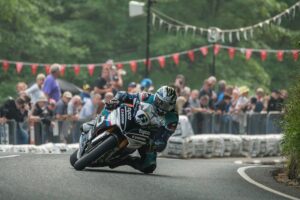 As Dunlop entered the pits at the completion of lap four for his second scheduled pit stop, he held an advantage out front of plus 40 seconds, the Ballymoney racer outpaced throughout by new lap record holder Harrison, was now firmly on course for a 16th TT victory.

Harrison’s retirement also elevated James Hillier and David Johnson up the leader board with the highly rated racers holding now third and fourth on the time screens.

Honda Racing’s Ian Hutchinson was another high profile retirement on lap 4 in a race which was steadily gaining a fair attrition rate.

Onto the fifth and penultimate lap of the race and you could tell Michael Dunlop as in previous Superbike TT encounters was managing the race, keeping a now following his second pit stop a 50 plus second gap over Conor Cummins.

Maintaining a healthy advantage which marginally increased by the end of the lap to just over 52 seconds, it seemed a now almost certainty that the racer described by many as a road racing genius, would make it four Superbike TT triumph’s in six years.

Quattro Plant/JG Speedfit Kawasaki’s Hillier, as ever showing solid, consistent, accomplished form in third was on course for an 11th place finish, whilst an intriguing battle for fifth was developing between Bathams SMT Racing’s Michael Rutter and Honda Racing’s Lee Johnston. 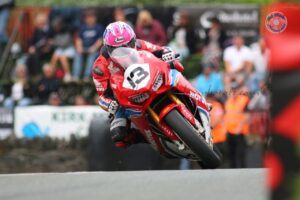 Just around five seconds covered Rutter and Johnston, as moved onto the sixth and final lap of what had been another first class RST Superbike encounter.

Showcasing again why he is rightly regarded as one of the greatest road racers not only in the 21st century but also of all time, Michael Dunlop did everything he had to do on the sixth and final lap to take his tally of TT victories to 16, equal now with great rival Ian Hutchinson’s amount of TT wins.

Victorious by just over 50.8 seconds, you could sense the emotion in the winners enclosure for the whole Tyco BMW team who have had obviously an extremely tough first week of Mountain Course competition. 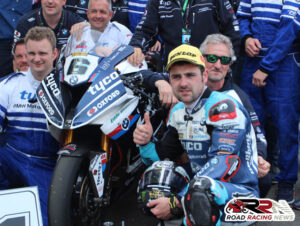 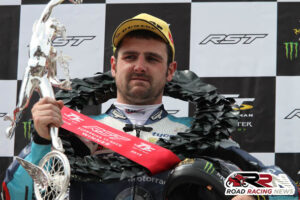 Paying tribute to his late but great team mate Dan Kneen, we saw the compassionate side of Michael Dunlop that many people ignorantly don’t think he has.

Race runner up Conor Cummins, who also became courtesy of his lap speed on lap two of 132.589 mph, the fifth fastest TT racer in history, also paid tribute to his fallen fellow countryman.

Concluding the rostrum finishers from today’s quite pulsating RST Superbike encounter was James Hillier who kept up his record of securing at least one podium finish or better at the TT Races since 2013. 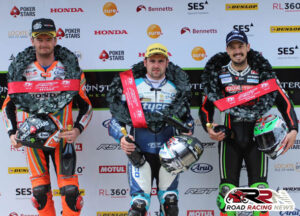 Gulf BMW’s David Johnson was a fine fourth, whilst Michael Rutter got the better of Lee Johnston in the battle for fifth.

Outside the top ten, others to raise an eye brow or two with their pace included PRL Worthington Racing’s Sam West, who on his way to a very creditable 11th place finish, lapped for the first time at in excess of the 129 mph mark.

You couldn’t but not be impressed as well with the exploits of leading newcomer Davey Todd (15th), who’s standing start lap speed of 126.268 mph, makes him now the third quickest TT newcomer in history.