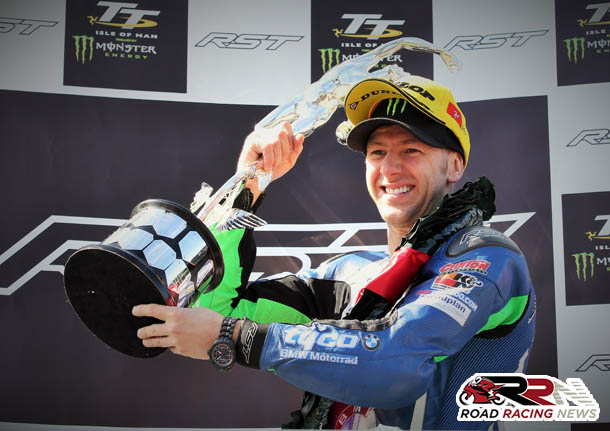 With near perfect conditions, albeit a bit windy on the mountain, the 2017 RST Superbike TT, got underway with Norton’s David Johnson, getting the six lap race underway, on exactly 2:00 PM.

It was JG Speedfit Kawasaki’s James Hillier who slotted into a surprise early lead at Glen Helen on lap 1, leading Dean Harrison by 0.863 of a second, Ian Hutchinson occupied third position, just in front of great rival Michael Dunlop.

By Ballaugh Bridge, Hillier’s lead was by a few tenths, with Silicone Engineering Racing’s Harrison, catching many by surprise with his pace.

Michael Dunlop was up to third, in front of Hutchinson, Padgetts Racing’s Conor Cummins and Bruce Anstey finalised the top six.

Dean Harrison then moved into the race lead at Ramsey Hairpin, half a second clear of Hillier, with Bennetts Suzuki’s Dunlop reeling the Kawasaki mounted duo in.

By the Bungalow, Dunlop slotted into race lead, the third different race leader in one lap!

From here, the 13 times TT winner, began to open an advantage, although pretty small out front.

At the end of lap 1, he lead by 1.885 seconds over Dean Harrison, courtesy of lapping from a standing start at 131.135 mph, James Hillier third was in close proximity, Ian Hutchinson and Peter Hickman, weren’t far back in fourth and fifth, as Dan Kneen concluded the top six.

The most high profile early retirement was Honda Racing’s Guy Martin, who was involved in an incident at Doran’s Bend, which apart from sustaining a sore wrist, was ok.

Onto lap 2 and drama struck early on, as Michael Dunlop retired at Handley’s Corner.

This elevated Dean Harrison into race lead, by Ramsey Hairpin the Bradford based racer, had a lead in excess of seven seconds, over Ian Hutchinson who slotted in front of James Hillier now third.

Over the mountain Hillier moved back into second, by Cronk Ny Mona, Hutchinson was down to fourth, with a charging Peter Hickman into third. 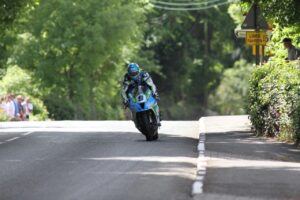 At the end of lap 2, Dean Harrison held an advantage of 5.437 over James Hillier, Hickman and Hutchinson where not far back, with just over eight seconds, covering the top four.

Norton’s David Johnson, holding the number 1 plate, was enjoying a solid race, holding seventh, at the completion of lap 2, as the first pit stops entered the horizon.

Following the pit stops, Harrison still in the race lead, had a new nearest challenger in the form of Tyco BMW’s Hutchinson, who gained a vast amount of time in the pits.

By Ramsey Hairpin, Harrison had just a 4.263 advantage over Hutchinson, who was beginning to run into form, in his first TT race since 2014 using Dunlop Tyres.

Through the Bungalow, the factory BMW racer, eaten significantly into Harrison’s lead, the gap was now roughly 1.5 seconds.

Onto Cronk Ny Mona and Hutchinson was just 0.28 behind his fellow Yorkshireman, at the resolution of lap 3, the 2010 Superbike TT winner moved into the race lead, by just 0.488 of a second, over Harrison. 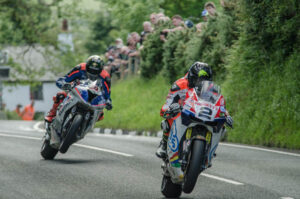 Hickman in third place, 3.172 further back, was showcasing why many had been tipping him throughout winter to contend for big bike honours at TT 2017.

Hillier remained fourth, whilst Michael Rutter slotted into fifth place, just ahead of Johnson, on the great sounding SG6 Norton.

Hutchinson and Harrison, swapped the number 1 position on the leader board, at the Glen Helen and Ramsey Hairpin timing points.

Over the mountain though, it was Hutchinson who began to get a slight grip and I mean slight, on the race, moving four seconds clear at Cronk Ny Mona.

Heading into the pits, Hutchinson held an advantage of just in excess of four seconds over Hickman, with Harrison, 1.6 further back. 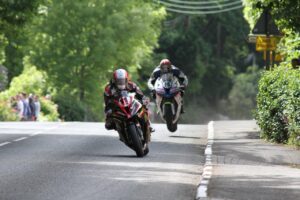 Bathams SMT Racing’s Michael Rutter in fifth, was now coming under pressure from Penz 13 BMW’s Dan Kneen, who had incurred a 30 second time penalty in the pits, at the completion of lap 2.

There was more drama, for leading Isle of Man competitors at the pits, as Conor Cummins dropped out of contention.

Onto lap 5 and Hutchinson, now ten seconds clear, following his second scheduled pit stop, looked now in control of what had been thus far, a quite dramatic race, surely no more drama?

Hillier back into second at Glen Helen, then dropped back behind Hickman, who from Ramsey Hairpin on-wards got his head down, trimming Hutchinson’s lead at the end of the penultimate lap to under eight seconds.

There was nothing in it between Hillier and Harrison, in third and fourth. Overall just ten seconds covered the top four.

Dan Kneen got ahead of Rutter to occupy fifth, as we entered the sixth and final lap.

Just when you thought Hutchinson had this race in the book, guess what another twist in one of the most dramatic Superbike TT races for many years.

His race lead was down to just over two seconds at Glen Helen! Smiths Racing’s Hickman was looking calm on track despite the obvious pressure.

By Ramsey Hairpin, the lead was back to 1.644, Harrison into third, was holding off Hillier, to secure the final spot on the podium.

At the Bungalow, it was a case of normal service resumed with Hutchinson moving into a lead, which now stood at a still very slender 2.8 seconds.

From here the Bingley Bullet kept up a strong accomplished pace, to ultimately cross the line, just over five seconds clear, to record his 15th TT victory.

It’s his third big bike TT success and one that elevates him in terms of TT wins, in front of the legendary Mike Hailwood. 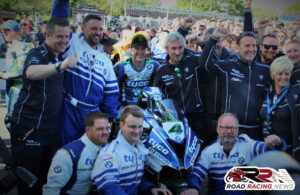 Peter Hickman in second place, was absolutely delighted at recording his first TT podium finish, it’s also Smiths Racing’s first podium finish at the most famous road race in the world, since their memorable Supersport success in 2014 with Gary Johnson. 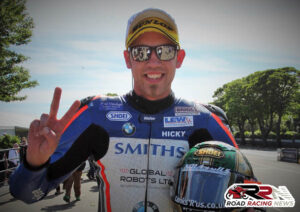 Dean Harrison, throughout in contention for race honours, sealed the final place on the podium, his first big bike podium finish, at the TT Races.

Dan Kneen fifth, matches his and Penz 13 BMW’s best ever TT result. The top six was completed by Michael Rutter, who made it four S1000RR BMW mounted riders, within the first six finishers. 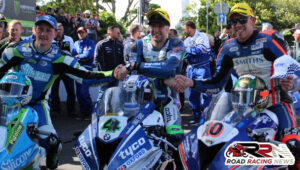 Overall, today’s race, has to be regarded amongst the most exciting and gripping Superbike races of recent years, to grace the TT Races.

Interesting to note that taking out the pit stops, Peter Hickman would have secured today, a first TT victory.

Due to this in my opinion, this was a race won in the pits, top marks to the Tyco BMW crew. In the press conference Ian Hutchinson added his huge thanks to his teams great work.

Now a 15 times TT winner, the now 29 times international road race winner, will go into the next week of action on the Mountain Course with great confidence. 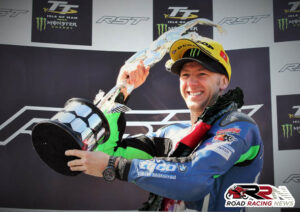 As proven today though, he knows the likes of Hickman, Harrison, Hillier, Kneen are all getting closer and closer to his metronomic TT race pace.

At the end of the day though, to win you have to finish and his fellow international roads giant, did this and some.