Andy Farrell following on from third place finish in junior Manx Grand Prix kept up his great form slotting into third position. By end of opening lap Neesom held a 0.7 second lead over Hodson with Farrell only a further three seconds back with Ben Rea holding a fine fourth position on CMS racing ER6 Kawasaki.

On lap two Rob Hodson was on a charge by Glen Helen moving into race lead and then by the Bungalow holding over six second advantage over James Neesom who in turn was closely followed by Andy Farrell on full factory winners wear backed ER6 Kawasaki.

But then bad luck struck again for Hodson as he ran out of fuel whilst leading at Hillberry. Gary Gittins went straight through at end of lap two which meant that new race leader James Neesom wouldn’t be in race lead for to long following his pit stop.

Following pit stops Gary Gittins had a lead of over 32 seconds over James Neesom in second position with Andy Farrell completing the top three. The top three maintained their positions on lap three as a good battle was developing for fourth place with Ben Rea, Warren Verwey, Callum Collister and Dean Osborne all in with a great opportunity of securing a standout result.

Gittins lead out was reduced to 26 seconds by the time of his pit stop. After pit stop the rider who loves competing on the mountain course had maintained a reasonably comfortable lead of 11 seconds over Neesom who in turn was three seconds in front of Farrell in third place.

The rest of final lap saw a calm, cool and highly accomplished from James Neesom as he maintained a consistent gap around the 24 seconds gap over Andy Farrell in second place. 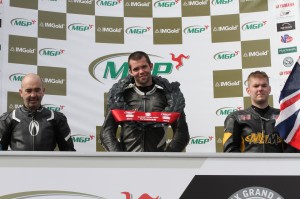 At the line James Neesom clinched 2014 super twins Manx Grand Prix victory by 28.876 seconds as Andy Farrell recorded his second podium finish of the day in second position, Callum Collister rounded out the podium finishers whilst Warren Verwey was a superb fourth.

Ben Rea acquired fifth position after a meticulous and consistent performance on CMS racing ER6 Kawasaki, Dean Osborne winners of newcomers B MGP on Tuesday was an impressive sixth.

1993 formula 1 TT winner Nick Jefferies recorded a great seventh place finish in a race which saw three different race leaders but one that in all saw James Neesom clinch the highlight of his road racing career to date, James has joined the likes of Martin Finnegan, Ian Hutchinson, Dan Kneen and James Cowton on becoming a Manx Grand Prix winner.