Mick Jordan following on from an excellent opening lap of 2014 lightweight Manx Grand Prix managed to keep up his relentless good form to clinch victory on his own teams NC29 Honda. 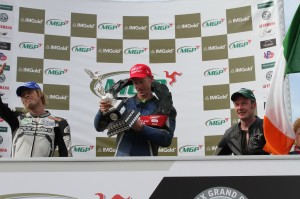 Mick who has been competing at the Manx for many years was delighted to clinch arguably the biggest win of his road racing career. Gavin Lupton newcomers B Manx Grand Prix winner in 2011 clinched second position on Shay D racing 400 Honda as Dan Hobson was a fantastic third.

Winning at the Manx Grand Prix is an achievement every road racer wants on their CV, Mick Jordan has now joined a very elite amount of riders to have won on the greatest road racing circuit in the world the mountain course.